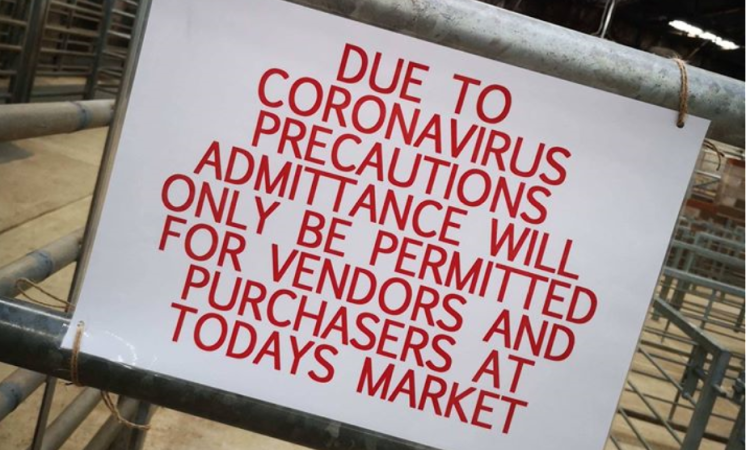 A large number of marts across Northern Ireland have announced the suspension of operations for at least two weeks – with immediate effect.

Although marts – both north and south of the border – took action to implement rigorous protocols and restrictions on health and safety over the last number of days, the Northern Ireland Livestock Auctioneers’ Association (NILAA) stated that the decision was reached following consultation with medical experts.

AgriLand understands that at least 13 marts have issued statements on social media over the past 24 hours.

One such message posted by Enniskillen Ulster Farmers Mart states: “For the health, safety and well-being of our customers, employees and the community, we are temporarily suspending sales for two weeks effective from Monday, March 23.

“This part of a corporate decision by NILAA in light of the very serious Covid-19 pandemic. Medical advice is that the next fortnight is critical in halting the spread of this virus.

“Your safety is our top priority. We know that this is an extremely difficult time for the farming community and that we have a vital role to play in the food-supply chain.

“We endeavour to be open again as soon as possible,” it concluded.

These temporary closures follow the suspension of three other marts in the region last week. Downpatrick co-operative Marketing Ltd announced that it would cease trading on Friday, March 20.

Additionally, Saintfield Livestock Market in Co. Down and Armoy Livestock Mart in Co. Antrim confirmed that sales would be cancelled from last Monday, March 16.

South of the border

Meanwhile, in the Republic of Ireland, the majority of marts continue to operate – albeit under strict protocols and guidance from the Irish Government and the HSE.

Anecdotal comments from various mart managers to AgriLand indicate that, where these restrictions and new measures are in place, farmers are “cooperating” and sales are proceeding carefully.

Some restrictions include: ‘drop-and-go’ systems; buyers and seller-only systems; signing in; and social distancing ringside. Farmers are also being advised to ‘glove up’ when entering the mart facility.

Stay tuned to AgriLand for more on this developing story…