NI milk production levels and prices continue to rise in 2017

Both milk prices and milk production levels across dairy farms in Northern Ireland have continued on their upward trend in 2017.

In relation to prices during the first nine months of this year, dairy farmers in the North have enjoyed an increase of almost 50% compared to the same period in 2016.

The average farm-gate price of milk has increased for five consecutive months up to September of this year, the latest figures show.

In September, farmers received a price of 31.02p/L for their milk – this was an increase of 9.8p/L on the price on offer 12 months previous. This equates to an increase of approximately 46%.

Meanwhile, a similar increase is apparent when you compare the average price between January and September of this year to the same period in 2016.

In September of this year, the volume of raw milk produced was 159.67 million litres. This was 5.5% higher than the corresponding month in 2016.

When comparing the first nine months of the year, there was a 2.8% increase in milk production levels evident in 2017 on NI farms. The volume of raw milk produced in that timeframe totalled 1,758.9 million litres.

Milk production on dairy farms in the Republic of Ireland continued to rise in 2017, with an increase of 8.2% evident in the nine-month period between January and September of this year compared to 12 months previous.

During the nine-month period of this year, some 6,100.7 million litres of milk were produced on dairy farms across the Republic of Ireland, according to the Central Statistics Office.

Domestic milk intake by creameries and pasteurisers was estimated at 644.8 million litres for September of this year, the CSO added. This was 10.5% above the corresponding figure for 2016. 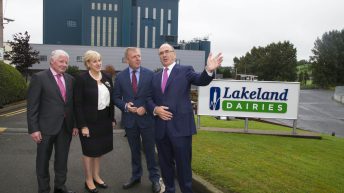