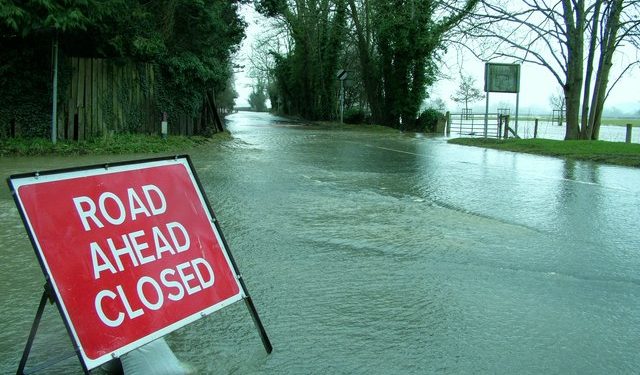 The flooding that struck the north-west of the country has left a trail of devastation in its wake in both the Republic and Northern Ireland.

Bridges have collapsed, roads destroyed, animals drowned and cars swept away according to local reports.

Minister of State with responsibility for the Office of Public Works and Flood Relief Kevin ‘Boxer’ Moran visited Co. Donegal yesterday and witnessed the damage done.

Speaking to RTE, Moran has promised to do everything he can to help the flood-stricken areas. He said: “I am in contact with my ministerial colleagues to ensure that every possible assistance is available to persons affected by the event and to ensure that damaged road and bridge infrastructures are addressed as soon as possible.”

According to An Garda Siochana, a number of roads have been closed in Donegal. Locals have tweeted the damage caused to some roads.

According to Met Eireann, 60-80mm of rain fell in parts of Ulster. Malin Head was reported to have had over 70mm before a thunderstorm cut power to the area.

There have been reports of livestock lost with the severe floods, including sheep, lambs and poultry.

According to the News Letter about 55,000 chickens were lost during the chaos.

87% of these of the incidents occurred in Western Area. Firefighters rescued 93 people who were trapped by flood water either from their cars or from properties.

“Our Regional Control Centre (RCC) received 402 emergency 999 calls between 7pm last night (Tuesday, August 22) and 4:00am this morning (yesterday). At its peak time between 9:00pm and 11:00pm, RCC handled an emergency call every 45 seconds.

“Firefighters worked in extremely challenging circumstances to reach people. A number of roads were impassable due to flooding and Crews had to take alternative routes to attend some incidents,” Walmsley said.

“We worked closely with colleagues from the Irish Coastguard Agency, PSNI, Ambulance Service, Foyle Search and Rescue and local Councils, to respond to incidents to assist members of the public. Our specialist teams including the Water Rescue Teams and Specialist Rescue Team from Belfast were deployed and worked alongside local operational crews.

“This was a very busy and challenging night for fire crews and our Regional Control Centre personnel. I commend them for their professionalism in responding to such challenging circumstances as efficiently as they did throughout the night.

“I want to also take this opportunity to remind the public that in the event of serious flooding to phone the NI Flooding Incident Line on 0300 2000 100. This is open 24/7 and a member of staff will take your details and contact the appropriate agency on your behalf. If there is a risk to life dial 999 immediately and we will respond,” Walmsley concluded.