A steady number of Irish buyers attended a second-hand machinery auction in the UK recently, which had a sales total of £3.5m (€4.04m), according to selling agents Cheffins.

This represented an increase of £1m (€1.15m) compared to sales figures from November 2015.

Interest from UK machinery dealers made up 50% of the deals at the auction, but there was a steady number of buyers from Ireland and continental Europe, he added.

There was plenty of interest from buyers, those that were here were buying more stock to fill up their own yards as they have buyers on their end as well.

“There is a shortage of quality second-hand machinery, we were on the phones straightaway after the sale in a bid to find more stock for the next sale as we have buyers waiting in the wings.

“With regards to tractors, close to 60% of the stock in the yard was sold, that’s two out of every three tractors sold,” he said.

The late or protracted harvest season may have delayed farmers coming to auction, while cash flow may have been tight for farmers until they brought some of their reserve stocks to market, Godfrey said.

Tractors with around 100 horsepower provides our core market, but the increased interest in higher horsepower machines was the cherry on top.

“Farmers may have noticed they needed some extra horsepower or just needed to upgrade their fleet during the harvest and drilling season and took this sale as an opportunity to do so,” he said.

Farmers are looking at more cost effective ways to spec-up and improve their tractor fleets, as new tractor registrations fall in Europe and the UK, Godfrey said.

Against a challenging agricultural climate, dealers are reporting that farmers are turning to second-hand stock rather than purchasing new machines, a trend that was reflected in the latest sale, according to Cheffins.

With the increase in total sales figures, it is plain to see that both the UK and export market for second-hand machinery is booming, according to Director at Cheffins Bill Pepper.

“The cocktail of rising prices for new tractors, lack of new tractor registrations, a shortage of stock for dealers and a drop in trade-ins has really bought the UK dealers back to our market.

This, combined with the export trade making the most of a drop in the pound, has led to UK buyers vying against the foreign buyers and has in turn pushed up prices.

“A number of farmers have been entering stock to be sold as they see auction as the best way to achieve the highest prices,” he said. 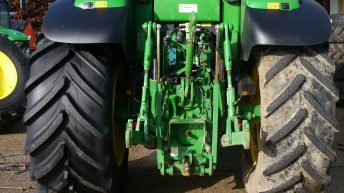