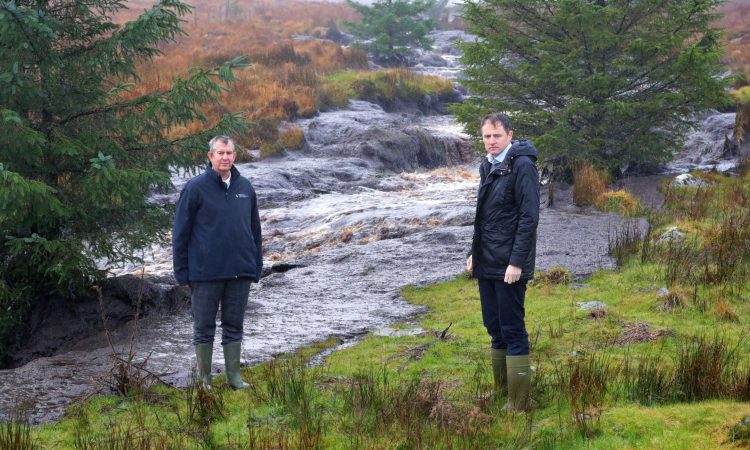 Ministers Poots and McConalogue were shocked to see the devastation caused by a peat slide that has polluted the Mourne Beg and Derg Rivers.

DAERA Minister Edwin Poots and DAFM Minister Charlie McConalogue visited Meenbog, Ballybofey, which is within the site of a wind farm that is under construction.

The wind farm developer has suspended all works at the site with the exception of those that relate to mitigating the impact of the bog slide and reducing the risk of further slides.

Minister Poots also visited the Corgary Trout Farm in Castlederg, which has been seriously impacted by the pollution incident and continues to experience ongoing losses as the water is still heavily contaminated with peaty sediments.

Speaking after the visit, Minister Poots said: “The scale of the damage is shocking, the devastation caused by the peat slide to the local river systems is very serious and there is substantial ongoing damage inflicted on the Corgary Trout Farm.

It is clear that this peat slide has had an immediate impact on fish and the ecosystems upon which they rely but until conditions permit, it is not possible to quantify that impact. Our immediate priority is to try to prevent any further slippage or pollution entering the waterways.

“There has been a large-scale, cross-border and multi-agency reaction to this incident and I am encouraged that all agencies involved are moving at pace to limit the risk of further damage, and will then be working together on restorative actions to remediate the affected rivers and the wider ecosystems.”

A cross-border multi-agency group has been set up to investigate the slippage and address the resulting significant and ongoing pollution that is impacting the Mourne Beg and Derg Rivers.

The groups will continue to meet, to keep the situation under review and further co-ordinate the response.

Minister McConalogue said: “This has been a really worthwhile joint visit with Minister Poots, which has allowed us both to see the damage on the ground for ourselves and to hear about the steps being undertaken by the wind farm developer to prevent further pollution.

I was also pleased to see the speed with which the cross-border multi-agency group was established in response to this incident and it was helpful to get a briefing from them on the work they are doing collaboratively to support efforts to mitigate against any further pollution.

The rivers Mourne Beg and Derg all form part of a large river system flowing into the River Foyle and then Lough Foyle.

This river system is important – not only for important species it contains and supports, notably Atlantic salmon, species of Lamprey and Otter – but also because of the range of river and associated habitats, such as woodland.

The system is protected as an Area of Special Scientific Interest (ASSI) and also is recognised internationally as a Special Area of Conservation (SAC).