Police forced to release coursers after witnesses refuse to give statements 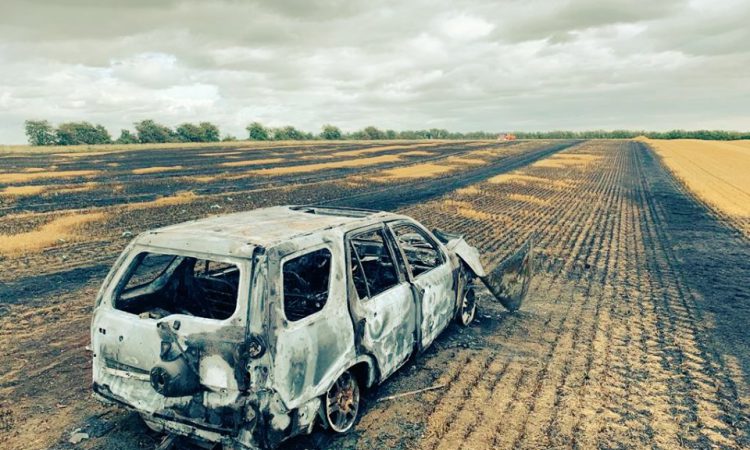 A gang of illegal hunters in Cambridgeshire are thought to be behind an abandoned car which was burned out on farmland in the county at the weekend.

However, police were forced to let four suspects go as no witnesses were prepared to give statements.

A spokesman for Cambridgeshire Constabulary’s Rural Crime Action Team said it had been a busy weekend with calls coming from right across the county.

Incidents included theft of diesel, a battery and irrigation fittings from machinery stored in a field, damage caused to filled fertiliser bags and a car driving through hedges and trees in Thorney, as well as “numerous reports” of suspected hare coursing.

In one instance, those responsible even set alight to the vehicle they were using causing further damage to the land.

On August 11, officers attended a field off Long Road, Comberton to reports of hare coursing and a vehicle on fire.

Local press said four suspects were found in a nearby pub and arrested.

However, officers were forced to let them go after witnesses were reluctant to give a statement.

A Section 35 dispersal order was issued. Five dogs were not chipped, and therefore, seized and taken into the care of the local authority.

The force had previously warned that August consistently sees the highest number of arson offences.

Over the last few years, Cambridgeshire Fire & Rescue Service has dealt with an average of more than 80 incidents during the month – significantly higher than other months.

It’s thought the high figure may be a result of hot, dry weather, school holidays and the harvest season.

A police spokesman said: “Arson is a crime and has consequences. Stack fires can destroy properties, kill livestock and put people in the nearby area at risk. Those caught starting fires can also face a prison sentence.”