To the end of September, Britain has experienced its lowest number of open market farmland launches since records, compiled by Savills Estate Agents, began in 1995.

The combination of political uncertainty and potential changes in agri-policy continue to delay decisions to bring land to the market; but, despite this, buyers remain active and farmland values have shown signs of growth for only the second time since March 2015.

For the farmland market, September is typically a rebound from the late summer recess (see graph 1 below); however, the latest quarter figures confirm a new record low with supply 40% down on the same period last year (30% down on the five-year average).

Total acres marketed fell to 105,000ac, which is even lower than the acreage recorded in September 2004 (116,000ac) when uncertainty before the introduction to the single farm payment affected the market.

The largest differential was a 49% year-on-year decline in Scotland where 21,214ac were bought to market - over half the long-term average. 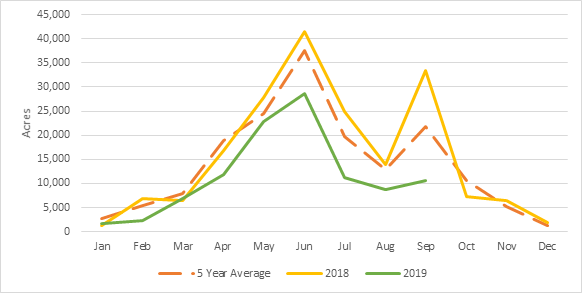 In light of low supply and active demand, green shoots are starting to appear in farmland values. Savills' Farmland Values Survey recorded an average net gain of 0.3% across Britain, only the second positive result since the peak of land prices in early 2015.

Good quality property and correct pricing which creates competition is generating some good sales at decent prices, but blighted properties or those with over-ambitious guide prices are proving challenging to sell.

“Such short supply and limited market activity mean that the circumstances of every transaction is different, so it’s incredibly difficult to identify 'trends'.”

Looking forward, the eventual outcome of Brexit negotiations is expected to increase market activity. Clarity in the political and economic environment may bring more land to the market as farmers assess renewed business objectives.

There will always be a market for good-quality farmland from those looking to expand their acreage either through renting, contracting or purchasing. Other land types are also attracting interest as attention is turned to filling environmental offsetting agendas.