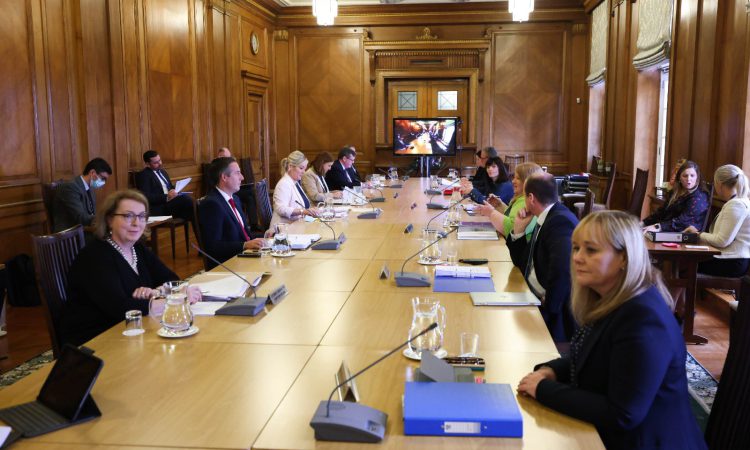 Agriculture Minister Edwin Poots is hoping a briefing from one of the UK’s most senior advisors on climate matters will influence Stormont colleagues to back his climate bill which aims for carbon targets.

Lord Deben, chairman of the UK Climate Change Committee, is visiting the Balmoral Show today (September 23) and is meeting with members of the Northern Ireland Executive.

Ministers will discuss Northern Ireland’s Covid-19 response, the Executive’s budget and climate change at the meeting which has just got underway.

It comes as two bills pass through Stormont setting targets for Northern Ireland’s response to the climate crisis.

Climate Change Bill (No.2) drafted by the Department of Agriculture, Environment and Rural Affairs (DAERA) proposes an 82% reduction in greenhouse gas (GHG) emissions by 2050, opposed to the heftier net-zero by 2045 target proposed in the private member’s Climate Change Bill.

Speaking to Agriland today, Minister Poots agreed there had been a “softening” in attitude from his Stormont colleagues.

“There is now recognition of the scale of what’s ahead of us. Therefore a slightly more moderate stance on it would be a bit more appealing than what it was,” he said.

“I hope my Executive colleagues will get a good understanding of what the implications of climate change are – what we need to do, what the expectations are from the Climate Change Committee and why they have recommended we don’t need to go for 100% [reduction] and the costs of what the Northern Ireland Executive will need to invest in it.”

‘Potential to wipe out 30% of NI manufacturing’

Speaking earlier at the showgrounds, Minister Poots warned “ill-thought solutions” would “threaten the viability of the region’s agri-food industry”.

“To wipe out 30% of our manufacturing industry, our largest exports, a £5 billion industry employing over 100,000 people is lunacy. Farming with investment and support can continue to provide food for growing world demand in harmony with the environment,” he said.

To meet our commitments to reduce emissions and tackle climate and environmental challenges, I have prioritised the development of a Green Growth Strategy, which my department is leading on, on behalf of the Northern Ireland Executive.

“I intend to publish a draft strategy for consultation in the near future to align with the UN Climate Change Conference of Parties (COP26), with a final agreed strategy to be in place for March 2022.

“An integral element of this strategy must include using waste streams from agriculture to provide energy and at the same time tackle other environmental challenges has real potential.”

The Agriculture, Environment and Rural Affairs Committee continues to consider evidence regarding Climate Change Bill (No.1), with time for an informal deliberation pencilled into the schedule for Thursday, September 30.

The Second Stage involves a vote at the Assembly, which it must pass before it can go on to the Committee Stage and Further Consideration and a second vote before going forward for Royal Assent and becoming law.

What carbon targets are in DAERA’s climate bill?

Reductions will be measured against the baseline year 1990 for carbon dioxide, methane and nitrous oxide and 1995 for the four other gases monitored.

Unlike the private member’s bill, which does not allow targets to be changed once they are set, the department’s bill sees it retain the ability to amend both target years and percentages.

However, this must be done only following consultation with the UK Climate Change Committee and other Northern Ireland Executive departments.