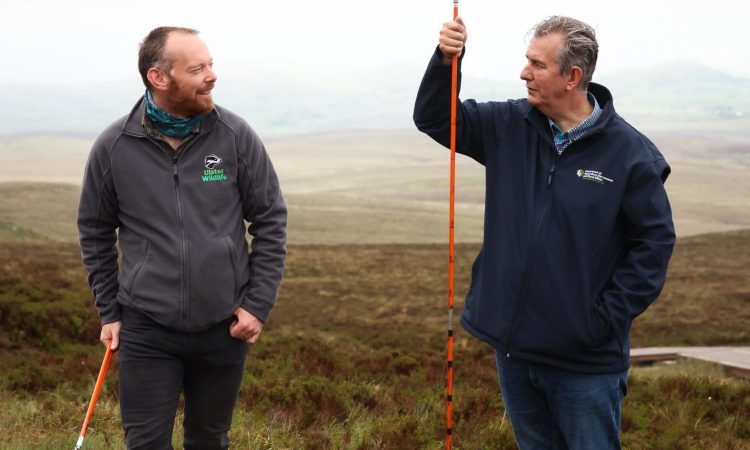 The minister launched the draft Northern Ireland Peatland Strategy 2021-2040, during a visit to Cuilcagh Mountain Special Area of Conservation in Co. Fermanagh during which he met with local landowners and Ulster Wildlife.

The groups are working with partners through the Collaborative Action for the Natural Network (CANN) project to restore precious peatland habitat on this iconic mountain.

Due to the popularity of the Cuilcagh Mountain boardwalk, erosion was caused to the very fragile upland habitat. The CANN project, funded under the INTERREG VA programme, has delivered habitat restoration and improved the path which leads to the summit cairn.

Speaking after the visit, Minister Poots said: “I am really pleased to see the work being undertaken at Cuilcagh Mountain Special Area of Conservation. Ulster Wildlife and their partners, including participating landowners, are striving to restore peatland habitat. It is vital that we do everything we can to protect this exceptional part of Northern Ireland, whilst at the same time, enabling visitors to enjoy what the area has to offer.

“Peatland restoration is a really important nature-based solution for addressing the climate and biodiversity crisis. I have therefore issued a public consultation on a draft Northern Ireland Peatland Strategy and I am keen to hear a range of views about our proposals to take forward peatland conservation and restoration over the next two decades.

“DAERA has a vision of a protected and enhanced natural environment, which underpins our emerging policies and programmes to deliver ecological and climate resilience through nature-based solutions, green growth and sustainable agriculture.”

At Cuilcagh, local farmers John Sheridan, and Aidan and Terry McGovern, are working in partnership with Ulster Wildlife to repair and restore bare, eroded areas of peat on a commonage with agreement from their fellow graziers.

This restoration work is carefully planned using data collected from a drone using LiDAR followed by hydrological analysis to ensure the appropriate techniques are used to restore the Blanket Bog. This has included the use of coir logs and reprofiling of peat banks.

Minister Poots concluded: “It’s great to see the work that John, Aidan and Terry are doing to restore the blanket bog, which will have a range of environmental benefits. My officials are working with farmers and land managers, agricultural industry representatives and environmental stakeholders to co-design agri-environment policy and schemes.

“This approach will deliver a range of environmental outcomes, including improvements in water and air quality, biodiversity and reductions in carbon emissions, as well as sustaining agriculture and local communities.

“I am also committed to delivering a new 10-year Biodiversity Strategy, in a renewed effort to better safeguard and restore Northern Ireland’s natural environment, in line with the UN Leaders Pledge for Nature, to which the UK is a signatory.”

Ulster Wildlife chief executive Jennifer Fulton added: “Farmers have a vital role to play as stewards of Cuilcagh Mountain, ensuring its rare habitats and species are cared for and protected for current and future generations.

“By blocking drains to rewet the peat so that it sequesters carbon and by carefully re-profiling bare eroded peat, they have taken the first steps on the journey towards net-zero carbon. This also improves the biodiversity value of the area.”

The public consultation on the draft Northern Ireland Peatland Strategy 2021-2040 will be open for 12 weeks until September 1, 2021, and can be read here on the DAERA website.