Potato harvest 2017: ‘One of the worst in living memory’ 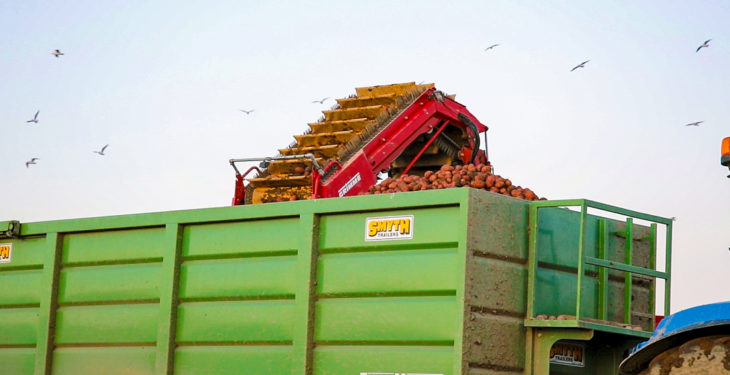 Potato farmers say they are experiencing one of the “worst harvests ever” with many warning their crops are rotting in the fields.

The Ulster Farmers’ Union (UFU) said it was one of the “worst potato harvests in living memory”.

Waterlogged fields have left as much as 50% of this year’s harvest still in the soil.

UFU potato chairman Robert Sibbett said: “The long stretch of wet weather has meant that fields have been virtually inaccessible until recently.

“Some growers have only been able to get into their fields for the first time this month.

Potatoes are rotting in the field because it’s so wet. I’m normally finished harvesting the potatoes by the time the clocks change.

“I don’t remember it being this bad since the wet weather in 1985. It’s having a knock-on effect on everything else.”

Rotting in the ground

In some cases, the situation is so bad growers have abandoned harvest attempts until the New Year.

There are also reports that small amounts of rot are being found in harvested potatoes in storage.

“These unfavourable conditions affect the quantity of marketable produce coming out of the ground. It is proving to be another financially testing harvest,” he added.

“Growers should continue to market their crops strongly and hope that these efforts are given due merit from buyers, processors and retailers.”

David Jamison, whose family runs Co. Antrim business Jamison’s Potatoes, was among those who had decided to abandon harvesting.

He said: “It has definitely been a very challenging year, from a late spring meaning the majority of crop wasn’t planted until may, to a wet summer making it almost impossible to get onto the fields with the sprayer at the seven day intervals required to keep the disease blight out of the crop.

“[The] harvest has been very ‘stop-start’ due to the weather again. Almost 50% of our crop is still in the ground [in] mid-November, when we were finished harvesting last year by the third week in October.

Like many other farmers, some potatoes may have to be left in the ground until the spring when ground conditions allow harvesting, when we should be focusing on planting next year’s crop.

“Farmers always talk about 1985 being a horribly wet year; but any that were working then and now say this year is much worse, because ’85 was a wet summer followed by excellent weather in October and November.”

“Normally by the end of October, the entire harvest would be nearing completion,” Wilson’s Country managing director Lewis Cunningham said.

“Growers have been using every opportunity, and no little ingenuity, to get potatoes lifted over recent weeks.

“But it has been a pretty thankless task. Ground conditions are extremely challenging. And this is particularly the case the further north to Co. Antrim and east one travels into Co. Down.

“Bruising has been a major problem this year. This has been caused by harvesting conditions and the fact that the potatoes coming out of the ground are so wet and heavy.

Currently, an extra 10% of new season crop is being discarded as it goes through the pack house due to bruising-related problems.

“Potatoes are an extremely expensive crop to grow. The industry is currently on a knife edge. Growers need several weeks’ dry weather to get this year’s harvest completed. And that’s a big ask at this time of the year.

“The number one priority is to get as much of this year’s crop out of the ground. Only then can we really assess the implications for potato supplies in the shops over the coming months.” 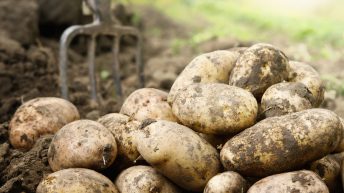