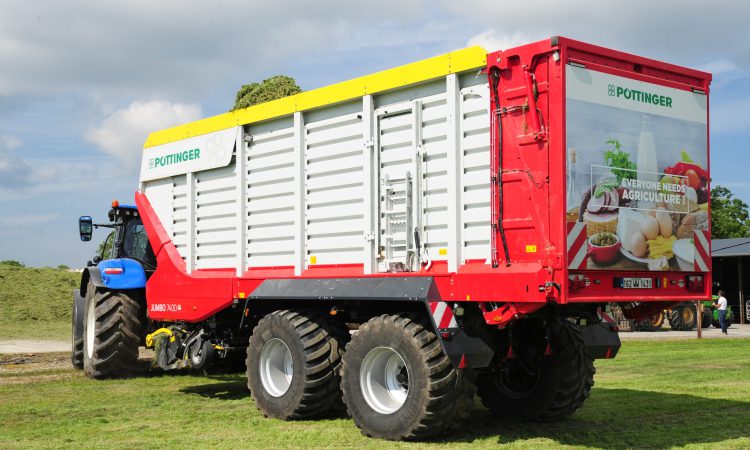 Pottinger has not been standing still over the last 18 months and has just launched a new range of Jumbo forage wagons, three brand new cultivation tools and a system for protecting wildlife from mowers.

There are three new Jumbo wagons which are completely new from the ground up.

The company tells us that they have been working on the design for at least five years and believe that the latest machines are a big step forward.

One of the most striking features is the utilisation of the space above the pick up reel and forward of the loading rotor.

This has been achieved by developing a front panel that will automatically move forwards once the main body of the machine has been filled.

Also notable is the drive train to the rotor, which now consists of a hydraulically tensioned belt complete with an accumulator to even out the shock loadings.

The pick up is driven from the tractors hydraulics and its speed can be varied to match that of the tractor. The reel itself is suspended in such a way as to provide much closer following of ground contours.

Agriland will carry a full report on one of the pre-production machines in action shortly.

Tillage customers have not been neglected by the company, for three new tools were introduced for shallow and inter-row cultivation.

They are a rotary hoe, an adjustable spring tine cultivator and a variable finger hoe.

Pottinger notes that they have been developed in response to the demand for mechanical rather than chemical weeding, and they may be used in both combinable and row crops.

All three have been designed to work with a steering camera and will be available from August onwards.

Technology to save wildlife

The third item is something that the company has been talking about for a while and has now entered production.

Called Sensosafe, it is a method by which wildlife may be detected while mowing.

Using near infra red lights and sensors, it is able to identify animals hiding in the grass and alert the tractor driver to their presence.

Although this may not appear of immediate concern in Ireland, the accidental intake of wildlife is a much bigger problem on the continent.

In a 1,000ha trial, the alarm was raised 140 times, the culprits being mainly young deer, game birds and even cats.