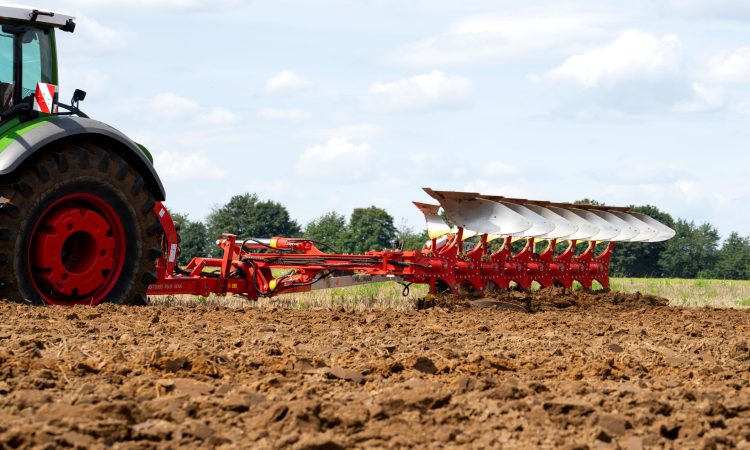 Last month Amazone proudly announced the launch of a plough suitable for tractors of ‘around 400hp.’ Within a couple of weeks Pottinger has gone one better with the unveiling of its Servo T 6000, a plough that can safely be hitched up to 500hp tractors.

The company claims that in developing the new plough, the main beam section and the Nova stone protection system have been revised from the ground up, to optimise reliability.

The new semi-mounted ploughs are offered in two versions, Standard and Plus, which have six to nine furrows. There are also Nova and Plus Nova versions of six to eight furrows.

These latter ploughs feature hydraulic stone protection with an adjustable triggering pressure of up to 2,200kg to help ensure uninterrupted ploughing.

The new series is available with a point-to-point spacing of 102cm and an underframe clearance of 80cm, or 90cm as an option.

Also available as an option, is an active traction control system which further transfers weight from the plough to the tractor.

This enables an extra loading to the rear axle of up to 1,100kg without affecting the tracking of the plough in undulating ground.

The system is claimed to eliminate the need to ballast the rear wheels as front ballast will be sufficient.

As a result, wheel slip is minimised and Pottinger claims that fuel consumption may be reduced by up to 3.5L/ha . In addition, damage to the soil structure through smearing is reduced.

The relentless growth in tractor power and consequential increase in wheel size has obliged plough manufacturers to revisit the geometry of the plough linkage.

Pottinger is no exception and the company claims to have adapted and optimised the geometry of this latest plough range to better suit the dimensions of new machines.

The ploughs are attached to the tractor using double-sided linkage lugs. According to the company this configuration covers every possible mounting geometry. A long drawbar provides more space for turning manoeuvres and narrow entrances.

The total number of greasing points has been reduced while easy adjustment of all the relevant settings is assisted by hydraulic systems and improved accessibility.