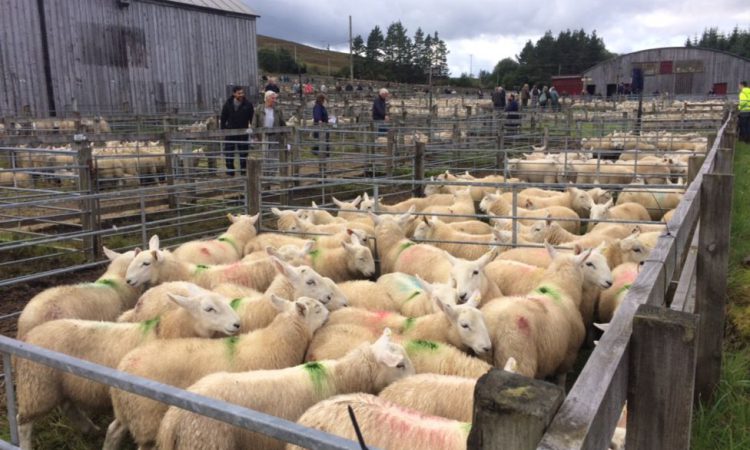 Prime lamb prices across Europe have strengthened seasonally over the past month with the Christmas period improving demand across Europe, according to the latest Quality Meat Scotland (QMS) analysis.

However, for Europe as a whole, prices are failing to match last year’s levels although there are significant regional differences.

“France and Spain are showing year-on-year falls of 4.5% and 11%, respectively, while Ireland and GB, when quoted in euro, are little changed on the year,” said Stuart Ashworth, QMS director of economic services.

Despite producer prices falling in France and Spain, GB prices remain well below these levels, leaving scope for exports.

According to Ashworth, exports continue to maintain their importance to the UK market.

“Although Customs and Excise data shows lower volumes of sheepmeat exported during September, lower domestic production in that month meant that exports continued to represent 30% of production, the same proportion as September 2017,” he said.

The recent publication of the full UK agricultural census from June 2018 reveals the UK lamb crop to be 2.3% lower than last year.

Between June and October, UK slaughter statistics suggest a lamb kill almost 5% lower than last year, resulting in the proportion of the estimated lamb crop already slaughtered slightly lower than in 2017.

However, the weekly lamb kill recovered during October to stand at similar levels to last year. This still, though, leaves fewer lambs on farms than this time last year.

“One feature revealed in the UK slaughter data is that lamb carcase weights have increased in comparison to last year; typically 0.2kg dwt higher over the June to October period with the gap widening in October,” said Ashworth.

“In support of this, the proportion of lambs over 45.5kg lwt, the upper limit of the Standard Quality Quotation, in auction sales has been higher this year.

“This is leading to increased discounts in the auction markets for heavy lambs of over 45.5kg lwt,” he added.

In recent weeks, the discount per kg for heavy lambs over the SQQ quote has widened significantly, from 2% in late October to 9% in the first week of December.

By contrast, Ashworth explained that in the same week last year, there was little price differential between heavy lambs and the overall SQQ average.

Meanwhile in the Republic of Ireland, lamb slaughterings since mid-year have been higher than last year, while their census showed a lower lamb population in June 2018.

Irish lamb slaughterings were particularly strong from mid-August to early November but by mid-November had slipped below year-earlier levels.

“Looking to New Zealand, competition may be less intense in the current marketing year,” said Ashworth.

Beef and Lamb New Zealand, in their most recent assessment of their current lamb crop, forecast a decline of 1.7% in lamb numbers.

“However, an expectation of an increase in carcase weights leads to the forecast of the tonnes of sheepmeat expected, falling by less than this.”

Similarly, Australia is forecasting a decline in its lamb slaughterings for their current lamb crop year of around 3% as a consequence of a decline in the size of their sheep flock in mid-2018 of over 5% as a result of the persistent drought.