Home » Machinery » Revamped combine from Deutz-Fahr; is it a contender?

Revamped combine from Deutz-Fahr; is it a contender? 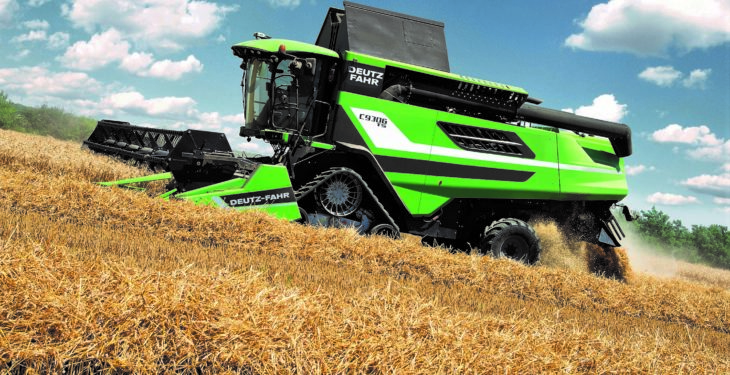 C9000 Series combine harvesters were launched more than four years ago. Now, Deutz-Fahr has revamped its five and six-walker machines; the latest line-up will be known as the C9300 range.

What’s new? The Mercedes-Benz engines, with 340hp and 395hp, now comply with Stage IV emission levels. The cab and controls have been updated. The grain tank has been enlarged by 10%. Unloading speed has been given a 30% boost.

The controls inside the CommanderCab VI have been “redeveloped”.

All controls are now integrated in the armrest of the new, extra-large seat; these are based on the control layout that is familiar to operators of the latest, high-horsepower Deutz-Fahr tractors.

Engine data and key settings are displayed on a new 8in touch-screen iMonitor.

The ‘Balance’ system is now operated via a joystick. It provides up to 20% lateral and 6% up/down hill compensation.

The ‘Agrosky Precision Farming’ system is managed via a second 12in iMonitor; it also displays the feed from the rear and side cameras. A total of three cameras are used on the combine.

The electronic control lever is now “integrated” into the design of the control armrest on the right-hand-side. Meanwhile, new cab insulation has dampened noise levels.

The hydrostatic drive, mated to a four-speed gearbox, is now controlled electronically; it’s said to be “more precise than previous versions”.

A cruise control function is designed to maintain the optimum working speed, while small adjustments can be made by pushing or pulling back the Commander Stick – to increase or reduce speed. Maximum speed on the road is 25kph.

The three-drum MaxiCrop threshing system, with an independent ‘Turbo’ separator, is unchanged from previous machines. It has a threshing area of 1.13m², a wrap angle of 121° and speeds from 210rpm to 1,250rpm.

The C9300 line-up is also equipped with electrically-adjustable sieves with a total area of up to 6.32m² for the six-straw walker model. Cleaning is carried using a turbine fan over the complete width of the sieves.

The new rear hood has been designed to improve the flow of straw – addressing a niggle raised with the previous version. The grain tank of the new C9300 Series has as an increased capacity – now 10,500L.

Thanks to a new two-feed system, the discharge speed through the unloading auger is now 120L/second.

When folding in the new 6m-long unloading tube, the auger “slightly changes its running direction” to firmly stop the flow of grain and avoid any spillage.

The new C9300 Series comes with Schumacher-type cutter-bars – from 5.4m to 9m. The new models are available for the 2018 season. 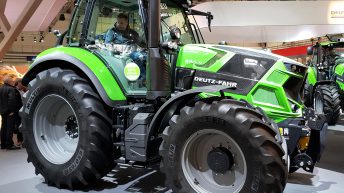