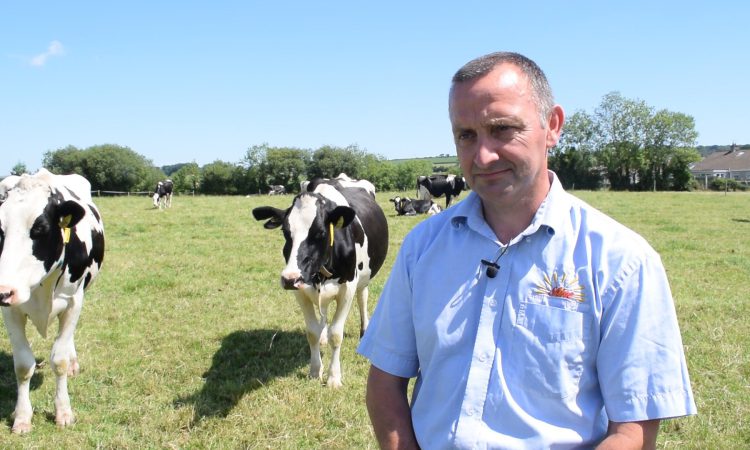 The farmyard is centrally situated, with approximately 39ha around the yard and the remainder in outlying farms.

The family has been milking approximately 100 Holstein-Friesian cows since they took over the farm in 1989. In 2011, they installed a 14-unit, 90-degree Milfos swingover parlour from McKnight Dairy Services.

A farm open day will take place on Wednesday, October 17 from 11:00am to 3:00pm on the Donnell family farm at Park Road, Ballymagorry, Strabane, BT82 0AN (signposted from the A5 in Ballymagorry village).

The cows were milked twice daily at 5:00am and 5:00pm, with an emphasis on grass production and feeding from mid-March until Mid-November, depending on annual conditions.

The farm objectives are to:

• Maximise overall farm profit;
• Have a labour-efficient working environment;
• Utilise forage from both grass and ensiled grass to its full potential;
• Make efficient use of nutrients (fertiliser and slurry) while meeting current nitrates legislation.

Robotic milking was always a plan in the background for the Donnell family and, when a 12,000l GEA tank was installed in 2012, it had to be robot ready.

After a few visits from dealers, James McKnight and Roy Clarke of GEA Ireland, “the option of going ahead with robotic milking looked more appealing with the introduction of the Monobox to Northern Ireland”.

The milk price was good and we could see the potential benefits to our farm objectives and lifestyle; but really, the cows made the decision.

The installation went according to plan. The design was supplied by GEA’s Declan Casey, who provides technical support in the local dealers.

“James, David and their team at McKnights do very tasty work and were very efficient with the installation,” commented Hall.

The open design of the Monobox, along with the silent operation and quick attachment, made the start-up easier than expected.

“For two days we penned the cows behind the robots and guided them. Over the next two weeks, the number of cows we needed to collect dropped every day,” according to Hall.

The grazing block around the yard is divided by a public road and an underpass was not an option due to water levels. A grazing plan and layout was designed by GEA to allow cows to access grass for 16 hours on a daily basis on approximately 20ha and eight hours at the feed fence, depending on the time of year and weather conditions.

After two weeks, cows were allowed access to grass using a selection gate. Cows have access to Block A from 2:00am to 10:00am (after they have been milked). Then, as they return for a second milking, they are rewarded with fresh grass in Block B from 10:00am to 6:00pm.

Any cows that come in after 6:00pm can access feed at the feed fence and stay in for the night.

“Allocation of grass is very important to encourage cows to move voluntarily. May was a difficult time to start this year with a big flush of grass; but once I got used to the new allocation, and we got around the block a couple of times, the cows were coming really well – with no cows to collect since mid-Summer,” remembered Hall.

Features and Benefits of the Monobox

On behalf of the Donnell family, we would like to thank you all for your kind donations to their charity. We would also wish to extend our thanks and appreciation to the Donnell family for opening their farm to the public to showcase the new GEA Monobox system – the latest in robotic technologies.

To find out more about the GEA Monobox click here