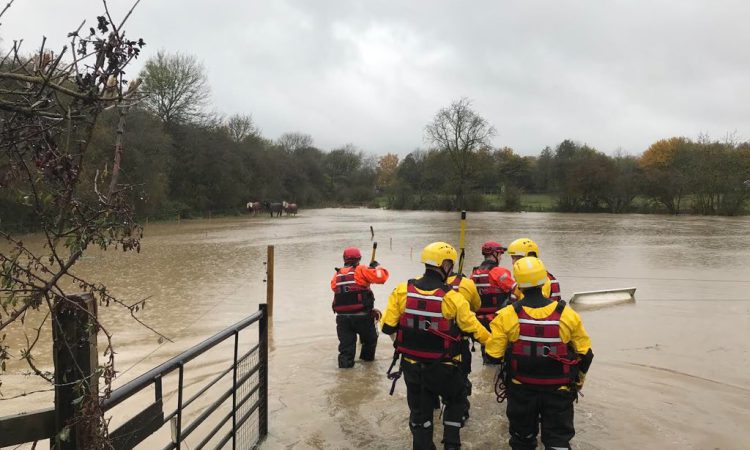 The RSPCA has said its emergency water rescue teams are on standby as almost 150 flood alerts and flood warnings have been issued across the country.

RSPCA inspector Jason Finch, the charity’s national water rescue coordinator, said: “Due to the expected heavy rain over the next couple of days falling on already saturated ground we have put the water rescue team on standby until Monday (November 11).

“Our control centre will inform our water rescue coordinators in the regions of any flood-related incidents so they can monitor and respond where necessary.

Our teams are specially trained to respond to animals in need during flooding and we’d urge any members of the public who are concerned for the welfare of animals – whether pets, livestock or wildlife – due to flooding to contact our emergency 24-hour hotline on: 0300-1234-999.

“We’d also like to remind other emergency services and agencies that we’re here to help with any animal rescues.”

The RSPCA has a team of around 60 officers – trained to work in fast water and contaminated water, to rescue both people and animals – to provide assistance to communities affected by flooding.

At the time of publication (November 8), the RSPCA had already received eight reports of animals trapped in floodwater overnight which local officers were able to assist with.

Finch added: “We’re on high alert in areas such as South Yorkshire, West Yorkshire, Greater Manchester and Derbyshire where significant surface water flooding has been described as ‘probable’.

We’ve been advised that there are also flooding risks in parts of the north, north Midlands, Lincolnshire, East Anglia, and in Wales.

The charity advises farmers move animals to high ground early, making sure they have emergency feed and fresh water supplies.

It also suggests attaching your contact details to gates so you can be contacted if you have horses or livestock in a field.

“Make sure you have a plan so that you know how to get your animals out of danger if the worst was to happen and you found yourself caught up in flooding,” Finch said.

Floodwater can rise very quickly so if there is a flood warning in your area then act early and put your flood plan into action.

“Don’t put your own life or another’s life in danger to attempt an animal rescue and call us for help in an emergency.”

Residents can stay informed by calling Floodline on: 0845-988-1188 for information and flood warnings 24 hours a day. Alternatively, information can be found on the Environment Agency’s website.

Residents of Wales should seek updates from naturalresources.wales/.