Rural mental health campaign urges farmers to look after themselves

The Farm Safety Foundation has launched its third annual Mind Your Head campaign this week.

The campaign, which runs from February 10-14, aims to raise awareness of the physical and mental wellbeing of our farmers.

The organisation wants people to recognise how the job can impact on the wellbeing of farmers and their families and how poor mental health can have a direct and deadly impact on the job.

The campaign asks farmers to:

Farmers are made of stern stuff. That is the message we like to send, particularly when teasing our urban friends and colleagues. Whatever task we are faced with, we just ‘get on with it’.

“Today, we have a new task that needs our urgent attention; our own mental health. In that context, getting on with it does not mean ignoring the problem, it means tackling it head-on.”

According to the Farm Safety Foundation, 84% of farmers, who are under the age of 40, believe mental health is the biggest hidden problem they face.

Farmers and their families have many of the same issues as the general population. But there are many other factors exacerbated by our way of life; isolation, weather, long hours, market conditions and business uncertainty which all take their toll.

Farming continues to have one of the worst safety records of any industry. Given the hazards of, for example, operating heavy machinery, being in the wrong headspace at work can lead to life-changing injuries – or worse. Indeed, 85% of young farmers believe there is a link between farm safety and mental health.

“Farmers are renowned for the care they give to their livestock and the attention they give their crops. Now is the time for us to better take care of ourselves,” added Tufnell.

“We are backing the third annual Mind Your Head campaign as, in a rapidly changing industry that is facing tremendous uncertainty, we have to remove what remains of the stigma attached to mental health.”

The Ulster Farmers’ Union was also among those to back the campaign.

We would like to remind farmers that yes they are superb at looking after their farms and their livestock, but it is vital that they take time to look after their own physical and mental health too.

“Farmers, if you need help–it’s ok to ask for it,” a spokesman said.

For more information on the Mind Your Head campaign, visit the Yellow Wellies website. 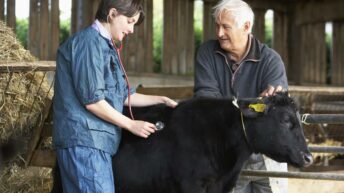 Farmers most likely to turn to vets for mental health support