The group, which is supported by the Soil Association Scotland's Rural Innovation Support Service (RISS), was formed to meet demand for a locally-grown organic protein for pigs and poultry.

“At the moment, we’re sourcing organic feed materials from as far away as China,” said David McClelland, technical director of Scottish feed manufacturer Norvite. “But we have a local market for it. If we can get a local supply it represents a huge opportunity for us and the farmers."

“I don’t know of anyone in the UK growing organic oilseed rape on a commercial scale,” said Murray Cooper, who runs a mixed organic farm near Inverurie.

“It’s notoriously difficult to grow. But growing it ourselves would give us control, reduce our reliance on imported soya - sometimes of questionable origin - plus it will reduce our fuel footprint. And with Norvite, we already have a processor for it."

“Sweden is on the same latitude as Scotland with a very similar climate,” said Cooper. “So it was really encouraging to see them growing it.

The tricky bit is the weeding of it. We’re not really geared up for it here, but over there they have a machine that sows, fertilises and does interrow weeding.

"I’m talking to the other farmers about how we might get one for use here.” 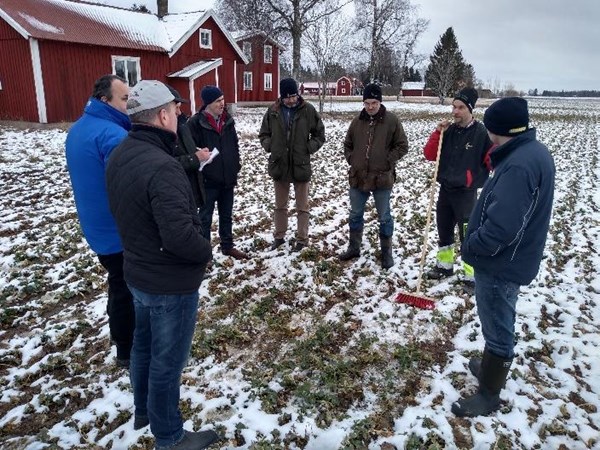 Research agronomist Robin Walker of Scotland’s Rural College (SRUC) was among those to join the trip.

He said: “The Swedes grow 10,000ha of organic oilseed rape annually out of a national total of approximately 110,000ha, so they clearly know what they’re doing.”

There’s a risk of crop failure with oilseed rape every five years, but the group believes that with specific techniques of planting and weeding, as Swedish farmers have developed, this can be overcome.

Alongside four other farmers in the North East, Cooper will plant oilseed rape in a trial field in September.

“I’ll plant it with spring beans and winter barley - that way I’m guaranteed a crop,” he said.

“Initially agronomist logic was that spring planting would be better,” said McClelland. “But we learned from Sweden that autumn planting starts the growth, then it’s ready for a flying start in spring and can outperform the weeds.

I think organic farmers are, by nature, innovative. They, perhaps by necessity, have a willingness to try things out and they’re not scared of failure.

"We’re excited about this process – these farmers see the opportunity, we have a market, and with support from RISS there’s that one person who pulls it all together.”

The group has another 10 or so farmers watching with interest and is looking for funding to develop the plantations as rigorous trials that will create a blueprint for growing oilseed rape nationally. But with or without it, they say they will plant the first crop this autumn.