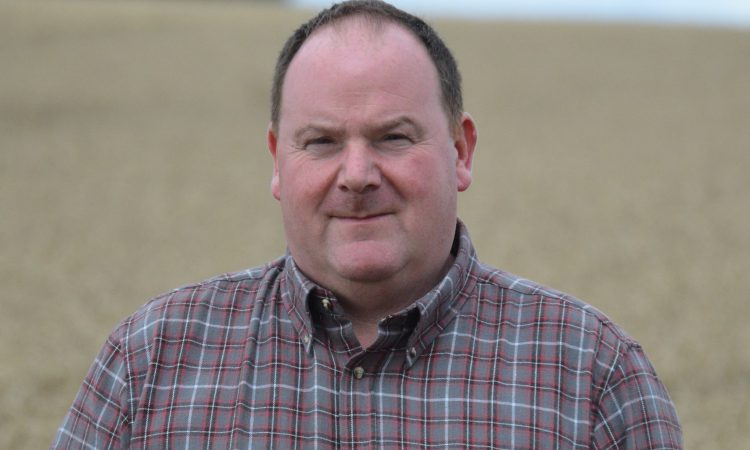 Brexit worries, tariff concerns, mixed weather and high drying costs are blighting what promised to be a great harvest in Scotland.

NFU Scotland growers around the country have been reporting some success with winter barley and small amounts of oilseed rape.

However, the recent poor weather means harvest for rape, wheat and spring barley will now have to be squeezed into the next available weather window and when ground conditions for machinery improve. Sowing winter crops of oilseed rape, wheat and barley may also be delayed.

Most growers are also resigned to drying costs, coming at a time when prices are falling, input costs are rising, and Brexit brings the threat of ‘no-deal’ and an unfair playing field on import tariffs.

NFU Scotland’s Combinable Crops chairman Ian Sands (pictured top), who farms at Balbeggie in Perthshire said: “Growers the length and breadth of Scotland all seem to be in the same boat as we watch the promise of a very good harvest falter in the wet weather.

“In Perthshire, it is very challenging. The harvesting of winter barley and oilseed rape should all be finished but there is a bit of winter barley still to be cut and straw that has been lying for some time waiting to be baled is looking very weathered now.

“There is still quite a bit of oilseed rape to cut, which will not be faring well in the heavy rain. Some losses will have inevitably happened.

Spring barley is just starting to come ready so we will know soon how it has fared over the past few weeks of bad weather. Some small amounts of wheat have been cut, and worryingly, there are reports of it sprouting in the head already.

“Regardless of what crop anyone is trying to harvest, the fields are very soft for travelling across with combines and trailers and, with more rain forecast, this will not improve anytime soon.

“Nothing will have been cut at very low moisture, adding into the mix a high cost of drying at a time when prices are falling. Wheat futures tumbled by £4/t on Thursday to compound falling prices over the past weeks, making it a very worrying time now.

“Hopefully the weather picks up and quick progress can be made through the main part of harvest and we can get next year’s crops back in the ground in decent conditions.”

“Harvest is progressing but at a very slow pace. Cutting decisions are made by the forecast and the potential deterioration in grain quality rather than moisture.

“Some oilseed rape is beginning to sprout, especially in the lying patches. Thursday (August 15) was a dry day and everyone was cutting, winter barley and rape were the priorities with a few moving into wheat.

“Some early wheat is also at risk of sprouting and if the weather improves it will be cut regardless of moisture and the added expense of drying will be accepted over quality issues.

“Spring barley is almost ready, and we are all hoping the weather will change considerably as we need drier crops and this straw is usually baled.

“I still have winter barley straw lying from three weeks ago, and if you look on my Instagram, you will see the state it is in.

“The amount of straw chopped has increased already and will continue to rise as wet ground conditions and mixed forecasts make baling and clearing fields almost impossible.

It is not all gloomy as the crops cut are good, but remaining ones are deteriorating in the wet and the bulk of the harvest is still to come.

“I hope by complaining about the wet, this will somehow change the weather for the better and you will wonder what all the fuss is about. Here’s hoping!”

“We haven’t started selling any crop this year, having stored cherries and waiting for the blueberries to ripen. It looks like a late blueberry season, so probably the last of the crop won’t ripen at all.

Wet weather has meant we have to work hard to keep the cherries clear of disease, but tehre have been no big problems so far.

“Because of the weather, demand for strawberries, raspberries and blackberries does seem subdued.”

“The weather has been very catchy. On winter barley, there is a lot of straw left lying from late cut crops, some of it up to three weeks old, and that will hold up planting for some.

“Harvesting of oilseed rape is underway. Spring barley and wheat are at least a week away for us but there are a lot of battered spring barley crops around. Moisture levels of what has been harvested so far are high.

“Harvest is probably more typical of a normal year than last year’s heatwave. The weather is a worry but it’s not a disaster yet.”

“At home, we achieved outstanding yields of winter barley with no issues travelling and the crops cut in late July and early August. Since then we have had about 100ml of rain and more to come tonight.

Our oats are ready, but the land is unable to carry the combine. I know because I tried and failed on Tuesday! We really need rain to stop now as four or five dry days are needed to let the ground dry enough to carry machinery.

“The stop/start harvest means we will have barley, oilseed rape, wheat and oats all needing cut at the same time, putting pressure on the availability of combines, trailers and balers. And as I write this, it is raining again.”

“So far, we have had good winter barley yields, which should go some way to making up for poor field conditions.

“The 2019 winter oilseed rape is being cut at 16 to 18% moisture when it should be 12% or below. Again, field conditions are poor, so surface damage is anticipated. The oilseed crop is now deteriorating hence the urgent need to get it combined and into the shed.

Around 80% of our 2020 crop of winter oilseed rape has been sown in acceptable conditions but and 20% of sowings have been poor so knock-on effects are already anticipated for our 2020 oilseed harvest.

“The forecast is looking better for next week. The issue then will be ‘telescoping’ of crops with winter oilseed rape and winter oats still to be cut impacting on harvesting spring crops and into wheat.”

“Winter barley harvest is almost complete, and it’s been very stop start over the past couple of weeks. There are still some areas with oilseed rape to lift that has been lying in a swath for three weeks and is not looking good.

“There are big problems getting straw cleared for oilseed rape planting and one estate near us has put self-propelled forage harvester into winter barley straw to get land cleared.

“We are getting very heavy localised showers nearly every day making the ground very wet. I anticipate that spring barley will be starting the middle of next week when hopefully the weather improves. There is lodging in some spring barley fields and harvesting them will be tricky.

It is a complete contrast to last year, with our winter barley yields down by 0.6t/ac.

“Progress is being made with the oilseed rape, but the weather has made travelling very difficult.

“Wheat will be ready to cut as soon as the weather improves. Oilseed rape has been cut but spring barley is still 14 days away.”

“Conditions have been challenging at best and remain so. Very little has been achieved in the past fortnight.

“Winter barley progress locally is probably around 60 to 70% complete but varies hugely between farms with some of the heavier land unable to support machinery now and subsequent deterioration of the crop as every day and additional rain shower passes.

“Lodging and brackling is rife despite strong PGR programmes with only the strongest programmes on wheat surviving unscathed.

Yields seem to be good across all crops so far however most haven’t ventured into spring crops yet. Quality may well prove to be an issue.

“My biggest concern now is the workload in front of us. Wheat and spring barley appear to be ripening at the same time with spring oats not far behind. It will be a question of where to turn first. Some growers also have second-cut silage that would normally be done by now.

“Next year’s oilseed rape still has time to go in the ground, but we really could do with some dry weather now to aid slug control.”

“In this area, winter barley is complete with good yields. Winter wheat is only just ready with a lot of crop on the ground due to heavy rain.

“Spring barley is still two weeks away yet, mostly standing, but there are a few fields down. The biggest concern now is the ground conditions.” 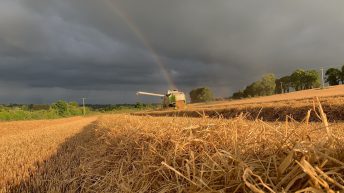 Grain price: No pot of gold at the end of the rainbow