Home » N.Ireland » Sheep, sucklers and saving lives… all in a day’s work for one Fermanagh farmer

Sheep, sucklers and saving lives… all in a day’s work for one Fermanagh farmer 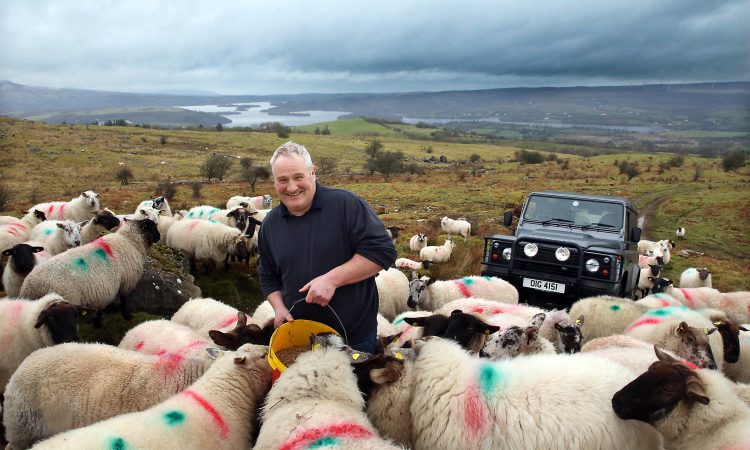 David Sheridan farms across several holdings around Letterbreen and Florencecourt in Co. Fermanagh with some further acreage just across the border – so close in fact, that one of his fences marks the border!

Lowland sheep and suckler cows are the family’s main enterprises, but David has a third passion. Helping save lives as a member of the prestigious North West Mountain Rescue Team.

“Back in 2013, our local section of the North West Mountain Rescue Team held an open day at their base beside one of our farms,” David recalled.

“Several members were neighbours and friends so I called in and was mightily impressed. One member that day, the late Maud Cunningham BEM, encouraged me to join. Saying I knew a lot of the countryside already, was ‘farmer fit’, practical and reliable.

So with all that praise joining seemed a great idea. And it was! Eight years later the North West Mountain Rescue Team are again recruiting and I would urge country folk to consider applying.

“This is a voluntary body covering all of NI, other than the Mournes, from bases in Fermanagh, Magherafelt and Ballymena. The Mournes having their own mountain rescue team.

‘You don’t have to be Bear Grylls – farmer fit is an advantage!’

“You do not have to be some sort of super-fit Bear Grylls or latter-day Mary Peters. Just farmer fit or even vet fit would be an advantage!” David quipped.

But how does he cope if there is a callout when busy in the lambing shed or a cow is calving? Simply by not being on call at very busy times of the year.

“Though make no mistake being in the team is a serious commitment with training two evenings a month at the local section base beside us and then province-wide courses and exercises most months, often with other organisations such as Coast Guard, police, RNLI, fire brigade and ambulance service,” David explained.

“Some folks even get to higher-level courses across the water or in the Republic. Indeed, we all aim to get Rec3 and Rec4, [Rescue and Emergency Care first aid qualifications].

“Remember, the team’s aim is to find those lost in often bleak landscapes and where necessary stabilise their condition.

“Then, if need be, they are packaged on a specialist stretcher, and carried to a place of safety for onward transport to hospital.

“Call-outs are mainly local, but in major incidents our section has been deployed to back up other teams as far afield as Mayo, the Mournes and Cave Hill.

Taking part in actual rescues and potentially saving a life gives me a great buzz and the whole experience of working in a team is great craic.

Life on the farm

At home, David farms with the support of his father Robert and son Lee across several holdings miles apart.

A contrast to being in the larger mountain rescue team extracting casualties amidst horrendous weather conditions.

Early innovators in many farming techniques David and family were among the first in NI to use expanded metal flooring in sheep sheds and sponging to tighten up lambing.

Ewes are mainly Cheviot Suffolk crosses put back, almost always, to Suffolk tups. Though some Texel rams are used.

“We have lambs for sale now most months of the year with ewes lambing in batches from Christmas through to April.

The Suffolk sired lamb tending to finish and get away sooner than those from a Texel tup. Thus making up for that problem of later Suffolks getting dirtier back ends.

“As regards suckler cows, the days of using wee blacks from the west of Ireland are gone. Now we supply what the market wants selling continental bred, single suck weanlings in Enniskillen from 10 months old for others to finish. Most of the cows are Limousin Simmental crosses put in calf to a Charolais.

“I guess that makes up for all the Brexit red tape hassle when we, as usual, buy our replacement suckler cows in the Republic. Ones without any Holstein in their background as is often the case if one tries to buy suckler cows in NI.”

With the North West Mountain Rescue Team 40 years old in 2021, David would love to see more farm folk and those from a rural background coming forward to volunteer.

“The training is practical, down-to-earth and suits a huge range of abilities. You will not be asked to handle anything on call out that you have not been well trained to cope with.

Yes, farming is great and producing stock that suits the market is brilliant. But so is helping save a life by bringing a lost, often injured walker back to their family.

“And remember, the team are also delighted to advise those enjoying outdoor activities on their preparation as regards lots of layers of clothing, footwear and plans.

“Have they prepared a route, can they map read, have they told others where they are heading and when likely to return? Did they check the local weather forecast?

“As in farming, having a plan and preparing to succeed makes for success and safety on the hill!” David affirmed.

“If in difficulties ring 999 or 112 and ask for police and request they deploy the mountain rescue. Our role is to rescue you from places no ambulance can reach.”

Both active members like David Sheridan and support staff are required from all across NI.

“While others stand back you will be equipped to step forward and help those in danger,” David added.