Pottinger, the Austrian machinery company, rolled out its new range of round balers at the SIMA machinery show in Paris last week.

Having ventured into the supply of round balers in 2014, after marketing Gallignani balers under the Pottinger badge, the company showcased its own ‘Impress’ range to almost 240,000 show-goers at SIMA. The Impress line-up is wholly built by Pottinger.

The balers that make up the Impress range are available in Master or Pro models.

The balers are reportedly suitable for handling straw, hay or silage and will be sold across Europe over the coming months.

The Impress models will be available as fixed or variable-chamber machines; there will also be a baler-wrapper combination.

Starting at the front, the company says that the new ‘Liftup’ feature facilitates a natural flow of crop – to allow straw, hay or silage to enter the bale chamber at an “ideal angle”.

This, it says, results in a “high-intake capacity, high baling performance, while also resulting in very low disintegration losses”.

In addition, the system feeds the bale chamber “more uniformly across the whole width of the baler”. This, says Pottinger, reduces the need for left/right steering corrections and weaving when trying to produce a “perfectly-shaped bale”.

The ‘Flexcut 32’ chopper can be specified with up to 32 twin-blade reversible knives, along with what Pottinger describes as a “proven individual knife protection system”. This means that the knifes are spring-loaded –  similar to the firm’s self-loading silage wagons.

The knife bank is positioned above the feed rotor, at about waist height. Interestingly, the unit can be slid or pulled out by the operator, for easy access.

This, says the company, ensures the “highest level of convenience, with maintenance taking place at workbench height outside the bale chamber”.

With 32 knives fitted, the baler offers a theoretical chop length of 34mm – the shortest on the market, according to Pottinger. In fact, the firm claims that the chop-length is 20% less than on competing machines.

This, says Pottinger, brings about a reduction in transport costs as well as storage costs – because less storage space and handling are required. 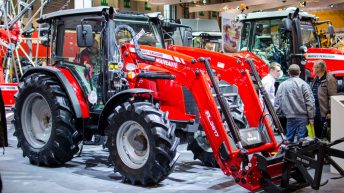 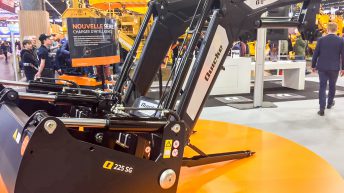 SIMA 2017: Weighing ‘on the go’ with Quicke’s latest loader