Home » Agri-Business » South American food production to increase by 40% – But what does it mean for Europe?

South American food production to increase by 40% – But what does it mean for Europe?

Food production in South America is set to increase by 40% in the coming years to meet the demands of European customers, Jack Bobo of the Intrexon Corporation has said.

Speaking at the Agricultural Science Association’s conference in Kilkenny, which was attended by over 400 delegates, the former Senior Advisor to the USDA said that Europe has exported its need for food to South American.

In the coming years, Bobo said that Brazil will become a major supplier of food on the global stage, while there will only be a small rise in the volume of food produced in Europe.

Europe is expected to increase its food production by just under 4%, similar to sub-Saharan Africa.

And, he added that it may not be wise to depend on one of the most bio-diverse regions in the world to produce food for Europe.

The US expert also said that global agriculture will meet a difficult challenge in the coming years, as the global population is set to increase to 9 billion by 2050.

“So in terms of land there is nothing bigger than agriculture,” he said.

Global food production needs to increase by 6% by 2025, he said, using less land, water, fertiliser and fewer pesticides to meet these demands.

Also speaking at the event, Teagasc’s Frank O’Meara said that Teagasc has a plan to intensify Irish agriculture in the coming years.

The Teagasc Director of Researcher said Irish farms are expected to increase production in line with Food Wise 2025 and this can be achieved by adopting new technologies on farms. 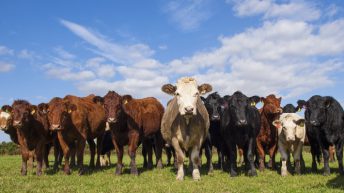