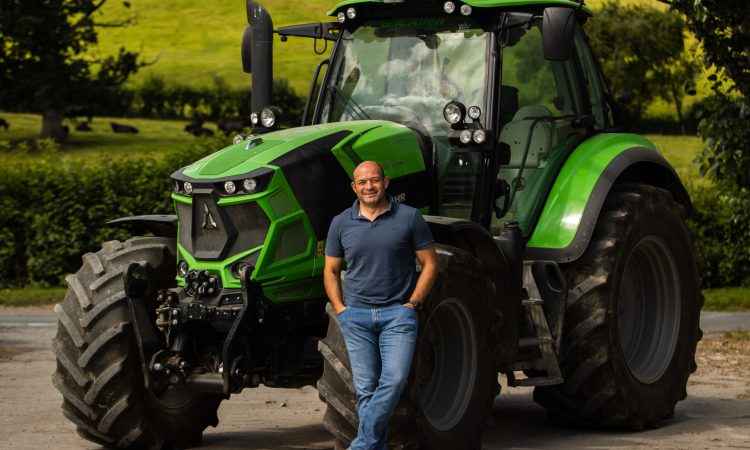 As former captain of the Ireland rugby team, Rory Best knows what pressure feels like – to have to get the job done, very often, based on a split-second decision. The farmyard is no rugby pitch, but a comparison can be made between this scenario and that of farmers’ split-second decisions to just get the job done – often in a hurry, and sometimes without due consideration for farm safety.

But to win at this game, farmers must take that few extra seconds to assess the job, the risks involved, and choose the safest way to complete it. Make that your routine, Rory said, and it will soon become abnormal not to do it.

The former rugby international co-farms with his father John and brother Simon in Armagh. The family farm enterprise is arable, managed by Simon with help from their dad, while Rory has a pedigree Aberdeen Angus herd.

We co-farm that herd because I am not there as much as I would need to be to look after it. So Dad does a lot of the day-to-day work, and I do a lot of the planning, looking after the genetics and progeny sides of things, the grass measurements, and all the technical stuff that I can do remotely or if I’m on the farm,” he said.

Farming and rugby were always his two passions, he explained. And, as in rugby, he is determined to bring his A-game to the farmyard – and that means safety comes first.

The Bests have introduced several farm-safety measures to their farm, Rory explained, from the simple to the more sophisticated.

“We have recently brought in a rule that everyone has to wear a high-vis vest now on the farm,” he said.

“We would regularly check the PTOs and we changed the slurry tanker PTO for a hydraulic pump a few years ago.

We also made a platform that can be lifted up with the JCB instead of using the bucket. God, I remember a time when we would have stood on the fork,” Rory said.

“Now, we have that platform with a rail on it that is about chest high.

“With handling equipment for the cattle, we are always looking at ways to do this better. We have just bought a new crush with side panels and doors too.”

The safety measures even stretch to the breeding standards of the herd, Rory explained.

“With the animals themselves, anything that shows poor behaviour, will be culled out of the herd. And, generally speaking, we would cull all the offspring from that cow out of the herd too.

“We have been doing that for a few years now, so generally speaking it is a reasonably quiet herd and that is the way we want it. We don’t want to take any chances,” he said.

Tragedy and near misses

The Best’s farm-safety procedures have come over time, against a backdrop of lessons learned and, sadly, close-to-home tragedy.

In 2012, Rory lost his former Ulster Rugby teammate, Nevin Spence, who was killed along with his father Noel, aged 58, and his brother Graham, aged 30, in a farming accident. Nevin, a rising star in rugby, was just 22.

All three died on their family farm in Hillsborough when they were overcome by slurry fumes. It shook the rugby and farming worlds hard.

I saw what the real cost was when this happened. We saw the effect that it had on Ulster Rugby, I remember speaking at the memorial, and as players, we went up to the farm quite regularly after. And every year at the anniversary, it is always a reminder of what can happen in farm accidents.”

He has experienced his own near misses on the farm too, he explained.

When you are dealing with livestock, there are always close calls and that is why our livestock-handling equipment is so much better now.

“But I do remember one time, I was helping Dad to put a huge pipe across the bottom of the yard. It was a big concrete pipe, maybe about five feet in diameter – the big, big heavy ones – and we were using a wee bar to set them off.

I set this one [piece of pipe] off, then I turned around to get the next one. But we were set on a very, very marginal slope and the next thing, it started to roll towards the trench where my Dad was.

“For a split second, my heart was in my mouth but Dad thankfully stuck his head up – I had been shouting and beeping the horn and thankfully he heard it. I don’t know whether it landed where he had been standing, and he had moved out of the way, but it was just one of those occasions where you were very grateful.

Every single pipe that I lifted up after that, I can assure you that whenever I set it down, I made sure it was not rolling.

“You don’t always get a second chance with something like that. There is always a close call, but the main thing is not to let that happen ever again.”

He also advised young farmers to look after their hearing, which can become damaged over years of being in the company of very loud machinery.

The big thing is prevention and to be sure to get it checked – do it as part of an annual health check – because once the hearing goes, you can never get it back. It is such an important thing for young male and female farmers to watch.”

While he has been marginally impacted by hearing loss, his father John has more long-term damage. It has been improved by hearing aids, which have really made a difference, especially as it was impacting his ability to communicate with his grandchildren.

When asked how he feels about the fact that the sector he is so passionate about is deemed to be the most dangerous, Rory said he can understand why this is:

You can understand why it is unsafe because of the nature of the industry you are dealing with, the size of the machinery, the unpredictable livestock, such tight margins, in terms of the bottom line, and with a lack of weather.

“I know we are being spoiled right now with the weather, but you can be sure that as soon as the combines come out of the shed, it will start to rain – and then, it is a race against time to get everything in.

That is why you feel like seconds make such a difference, and you’d almost feel stupid saying that to anyone who isn’t a farmer, but actually stopping to do something properly that might take 10 seconds more… farmers can feel like they don’t have the time to do it. So, on that hand you can understand why there are safety issues.”

But, he added that in a factory or a construction site, work would grind to a halt if there was a hint of safety concern. The farmyard must be treated the same.

Farm safety and the next generation

Ensuring that his children, Ben who is 11, Penny who is eight, and Richie who is six, get a taste of the farming upbringing he did is very important to Rory.

Ben loves his rugby and enjoys farming too; the youngest boy, Richie, is adamant that he isn’t playing rugby because he thinks that I want him too, which couldn’t be further from the truth; and Penny enjoys being out on the farm because she gets to spend time with me or my Dad.

“We gave him the responsibility of feeding the bulls that have just been weaned. They are on the paddock in front of the house and that is his job now, over the summer, he will feed them twice a day,” explained Rory.

Teaching children about farm safety can be done by including them in certain appropriate roles and supervising their education and development on the farm, according to Rory.

“The lessons that can be learned on a farm when you are child are so important, and it is really important for me that our kids get a little taste of what I had.”

But this practical education must coexist with safe farming practices and this is where farmers must lead by example.

“Firstly, make sure that everything around the farm is safe in the first place. But educating them [children] is important and if you never have them on the farm, you can never teach them the difference between right and wrong.

“Like, I would never just say to Ben, ‘away you go now, there are three bulls to feed’. It would all start with me doing it a few times, showing him how it is done, explaining to him what to do, telling him to be careful, to watch out for this or that, to stay close to the rail.

It is all an education for him and he needs to learn that while it is great to be able to work with animals, that they are also unpredictable. But you have to take time to educate children about what they should and shouldn’t do.

“But the kids are so smart now, that as soon as you start to teach them, they are very quickly teaching you and pulling you up on what you might have missed.

“And they are more likely to be the ones that will make Granda change, because Granda isn’t going to listen to his son, but he will listen to his grandchildren,” Rory laughed.

Rory Best spoke to Agriland as part of an awareness campaign in association with Specsavers, during Farm Safety Week, about the impact of excessive noise exposure.