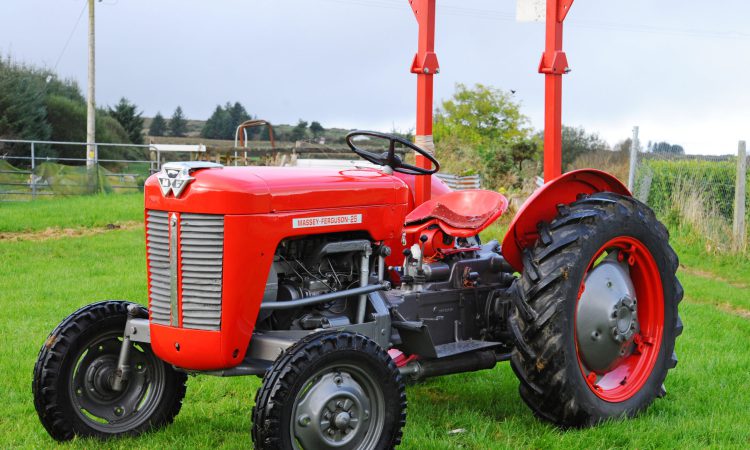 There is a tractor in Massey Ferguson’s distant past that probably sears the company’s collective conscience, the major reason being that the back wheels developed the rather frustrating habit of falling off.

However, that should not detract from the vitally important role it played in the evolution of the company as it slipped from the grasp of its founder, Harry Ferguson, and entered the world of corporate ownership after being purchased by the Massey Harris Company of Ontario.

The story begins with the attempts by the Ferguson company to sell its tractors into France after the Second World War.

The industry of that country was in ruins, yet the government was determined to rebuild it to its former glory, and as tractors were in short supply it quickly reached an agreement to assemble completely knocked down (CKD) kits of the Ferguson TE 20 made by the Standard Motor Company.

Harry Ferguson was an engineer rather than manufacturer at heart, so he had contracted out the building of his tractor to the Standard Motor Company at the old wartime shadow factory in Banner Lane in Coventry.

Standard Motors had run this factory on behalf of the British Government during the war, its main product being the Bristol Hercules aero engine.

It was quickly converted to tractor production in 1946 and remained as such until 2002.

The agreement reached between Standard Motors and the French was that the company could use the old Hotchkiss works in Paris to assemble the kits.

It was also agreed that as locally made components became available, they would be increasingly incorporated into the tractors.

Production started in 1951 and the French-made content of the tractors very quickly came to dominate.

Meanwhile, back in Britain, Massey Harris had purchased Ferguson tractors and it became obvious that as a tractor manufacturer itself, it was not going to continue subcontracting the work to Standard Motors.

This indeed turned out to be the case, and the recently formed Massey Harris Ferguson company decided to build a brand new factory in the town of Beauvais, north east of Paris, to make a new tractor.

Quite why remains unclear, but it was at this point the decision was made by the French management to design and build a completely new model, rather than produce the MF 35, which was to be made back in Coventry.

This became the Massey Ferguson 825 as it was called in France, and the MF 25 elsewhere.

It looked very similar to the MF35 and even shared the same three pot Perkins engine, but there the similarities stopped.

There is the suggestion that Standard Motors wished to continue producing tractors in France after the links with Massey Ferguson were cut, leading them to build a couple of prototypes designed by their French engineers.

This might help explain some of the problems of the ill-fated MF25, if a further piece of intrigue is added to the tale.

While assembling the Ferguson tractors, Standard Motors had also been attempting to buy the Hotchkiss plant outright for future car and tractor production.

During the negotiations it is said that the company was given some deeply flawed legal advice,

This resulted in the deal falling through and the plan to make the Triumph Herald, alongside the new tractor, in Paris never came to fruition.

Should this have been part of a plot to stall the a British company’s plans for France, then it might be equally possible that the design engineers were also involved.

In my view, the reason for considering this a possibility is that the design of the MF25 was so awful in places, that the flaws seem beyond mere casual incompetence, and it is worth taking a closer look at three of them.

The first is the aforementioned trait of the rear wheels detaching themselves from the transmission.

This was due to the half shafts lacking any mechanism substantial enough to hold them in place.

The problem was most pronounced when traversing slopes, but it was the uphill side that would come off, with the blessing that it rarely turned over, so that was okay then!

Brakes were the second issue, or the lack of them that is. The brakes were dry disc units, but instead of two pads gripping one disc from the outside, there was the novel arrangement of having one pad being forced between two discs.

This had two major drawbacks, first it was not particularly effective as the discs could flex away from the pad, the second was that in doing so they would bend the drive shaft.

The bent drive shafts would then distort the oil seal on the transmission, leading to a leakage of oil onto the hitherto dry discs with predictable and unfortunate, consequences.

Issue number three was second gear, which once selected would often stay selected despite the most strenuous efforts to deselect it, splitting the tractor being necessary often to complete the operation.

The list of problems did not end there, but they are enough to suggest that the tractor was almost designed to fail and bring the manufacturer into disrepute for a period.

It may well be the case that Massey Ferguson adopted the existing design rather than starting afresh or build the British-designed MF35, and so it ended up carrying the can.

However, it continued in production for three years at the Beauvais factory, which had been specially built to make it.

This factory has now become the centre of Massey Ferguson’s European operations while Banner Lane sadly closed on Christmas eve 2002, after making over 3,000,000 tractors.

The nicely kept MF 25 and TE 20 shown in this article are proudly owned by Denis Cobbet of Co. Cork. The MF 35 is belongs to Michael Ryan of Co. Limerick.