Transport and loader specialists in John Deere 6R line up 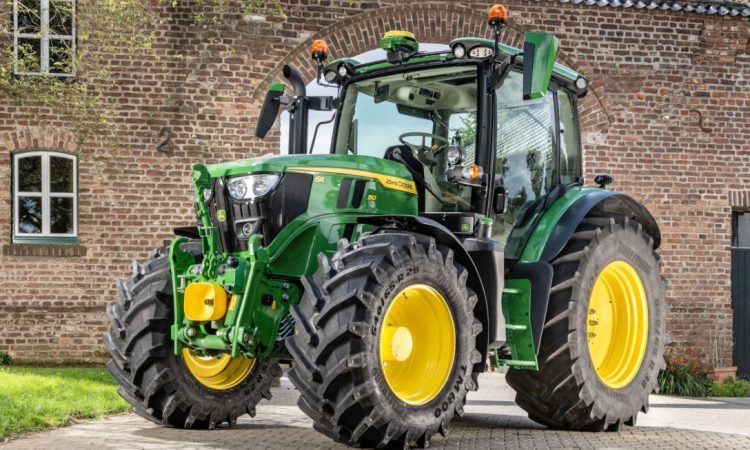 A study back in the seventies found that, although tractors were designed for field work they spent a large part of their life on transport duties.

This finding was something of a revelation in Britain but on the continent, where tractors were always built with both tasks in mind, it was old hat.

John Deere has reinforced this tradition in its latest 6R series.

Of the four new models that have joined the 6R series, it is the 6R 185 which has been aimed specifically at those customers who spend a large number of hours hauling on roads.

Rated at 204hp, it can deliver up to 234hp through the John Deere Intelligent Power Management (IPM) system should the extra be required.

The power comes from John Deere’s own 6.8L six-cylinder engine, which still boasts a compact wheelbase of 2.76m.

It is this, the company claims, that adds to its agility and, no doubt, its manoeuverability when moving trailers around crowded yards.

The other specialist tractor launched is the 6R 150. This has an empty weight of 6.5t and a total permissible weight of 10.45t, providing a generous payload of 4t.

Oil to the hydraulics is provided by a 155L/min pump and a dynamic weighing system comes as standard, enabling the weight of anything being carried on a loader to be measured while moving.

The engine is rated at 150hp which, John Deere is quick to point out, offers the performance of a six-cylinder tractor with the size and weight normally associated with a four-cylinder machine.

It is aimed primarily at stock farms where a front loader is an important part of the enterprise.

Another notable feature of all four tractors is that the IPM now responds to the demands of the hydraulic system as well as the PTO and the load on the transmission.

Another new feature of 6R series is what John Deere refers to as an ‘integrated 1-Click-Go AutoSetup system’. This, it says, makes setting up the tractor and implements much quicker and easier.

The required settings can be pre-planned and managed in the cloud. Such items as field boundaries, guidance lines and application prescriptions may be stored.

Once the tractor crosses the field boundary, the stored profile automatically becomes available, enabling all operators, including seasonal staff, to be consistently accurate.

Transmission options have also been widened to include the availability of the CommandQuad box as an option for four-cylinder models. This is in addition to AutoQuad Plus and the AutoPowr infinitely variable transmission.

One small alteration which will make life easier for all concerned is that the 6R range name is now followed by an approximate indication of the engine horsepower.