Home » Machinery » Video: Can ISOBUS save you money in the long run? 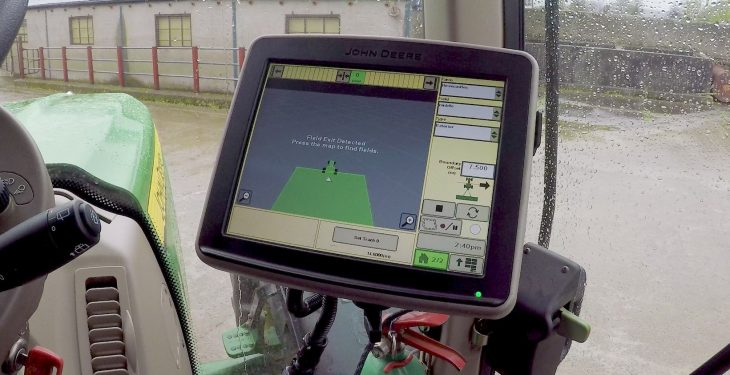 Tom Murphy, a tillage farmer from Co. Kilkenny, recently invested in both an ISOBUS-equipped John Deere tractor and an ISOBUS-compatible Amazone fertiliser spreader.

Murphy got the tractor’s ISOBUS equipment from Templetuohy Farm Machinery (TFM), who looked after the set-up of the GreenStar GPS navigation system, as well as the installation of the ISOBUS box, screen and AutoTrac automatic steering.

The advantage of getting both machines equipped with ISOBUS technology is that it simplifies the amount of overall hardware needed and enables both machines to ‘communicate’ with each other. Ultimately, it simplifies the whole set-up, as well as bringing useful flexibility and ‘universality’, with ISOBUS technology working across different brands and models.

ISOBUS protocols are monitored and promoted by the Agricultural Industry Electronics Foundation (AEF). Compatibility checks are carried out on a broad spectrum of makes and models to ensure full functionality.

According to the AEF, the primary goal of ISOBUS data technology is to “standardise the communication” which takes place between tractors and implements, while ensuring “full compatibility of data transfer between the mobile systems and the office software used on the farm”.

It’s a tidier job with less expense going forward. The system is an easier way of connecting implements to a high-tech tractor. It is the modern approach and it’s faster.

“As time goes on, more and more brands are working glitches out of their networks and the system is becoming more popular [with both manufacturers and users] all the time,” Palmer added.

On why a farmer would buy an ISOBUS-equipped tractor and fertiliser spreader, Alan O’Shea, also of TFM, explained: “Rather than having to drill a hole in the tractor to insert several cables, there is no need for additional boxes or cables when you buy additional implements or farm machinery.

“It is also more user-friendly to use just one main screen in the cab of the tractor, as opposed to having separate control boxes or monitors for each implement or piece of farm machinery.”

“It keeps the tractor cab free of clutter. For example, with an ISOBUS-equipped spreader, you don’t need to install the separate control box for the spreader inside the tractor cab,” O’Shea said.

“There is just an ISOBUS plug to connect up, then you can use the tractor’s own screen. It becomes a ‘virtual terminal’ for the spreader, on which you can see and do everything you would have been able to do on the spreader’s own controller – easier and faster.”

All of this mates well with the use of automatic, GPS-controlled guidance or steering. Because ISOBUS technology enables the tractor to effectively control the implement (shutting the spreader off, for example) when ISOBUS is combined with the tractor’s AutoTrac automatic steering, the tractor can tell the spreader what to do – and when and where to do it.

This helps to reduce waste as the spreader only applies fertiliser when and where it’s needed. It boosts accuracy and facilitates automatic record-keeping.

Tom Murphy is satisfied with the set-up so far. “I only have this tractor and spreader a few months, so it’s early days yet – but I am already very happy with both the GPS technology and the spreader,” he said.

Murphy bought a John Deere 6930 with an upgraded SF1 ISOBUS package. The total package (excluding the tractor itself, of course) cost between €9,000 and €10,000. It includes the latest, improved Autotrac features and the 2630 in-cab screen (which is tied into the GreenStar satellite-based system).

The spreader is an Amazone ZA-V mounted unit. The added ISOBUS and controller technology cost in the region of €15,000 extra. However, Murphy feels these extras were definitely worth the spend.

To put this in context, Farmhand confirmed that a basic, entry-level ZA-V spreader of this size would typically cost €13,000 excluding VAT. The list price can increase to €28,000 for an ‘all singing, all dancing’ version, with hydraulically-driven discs, electric shutters, weigh cells, 16-part shut-off, speed signal cabling, tilt/empty-level sensors, and all of the GPS and associated technology.

Farmhand also pointed out that some of its customers working ISOBUS machines actually prefer to use two or three control screens inside the cab, as this enables them to see more at any one time. Ultimately, says Farmhand, it is up to the customer to work the machine as he or she sees fit.

Using an ISOBUS spreader on an older tractor

Farmhand was also keen to point out that an ISOBUS-compatible spreader can be bought and, with a simple retro-fit loom, be worked on an older tractor. For example, even an MF 165 could be hooked up to an ISOBUS spreader (and gain most of the benefits, except automatic steering) by connecting up a suitable base unit, speed sensor and antennae (and using the spreader’s control terminal, of course).

The company says that small steps can be taken with regard to investment, but cautions that it makes little sense to buy a new machine nowadays that is not ISOBUS compatible at all.

Meanwhile, back in Kilkenny, Murphy explained that with suitable mounting hardware, John Deere’s AutoTrac and GreenStar technology can be transferred from tractor to tractor – or to a combine.

Murphy said he had discussed the spreader in detail with farmers who already had Amazone machines before investing. They recommended the system to him. “There is about 5% of a saving on fertiliser costs when using a spreader with this technology,” he explained.

The saving is great. The fertiliser goes exactly where it needs to go with no overlap. The spreader closes if it detects an overlap.

When asked about potential problems, Murphy noted: “I’ve only had it two months yet, so it’s early days but I haven’t noticed any disadvantages. I won’t know from the crop end of things until harvest – but so far, so good.”

On getting all the equipment field-ready, Murphy said: “It took a while to get set up; it took a few days for the lads to put things together but that’s to be expected. Alan O’Shea of TFM (who supplied the tractor) and Nicholas Maher of Eardly Machinery (who supplied the spreader) both worked on it and I must say, I couldn’t fault either of them. I was 100% happy with them on both sides.”

“I definitely think that GPS navigation is the way to go. At the end of the year, I’m hoping to get ISOBUS technology for spraying as well – for all the same reasons,” Murphy said.