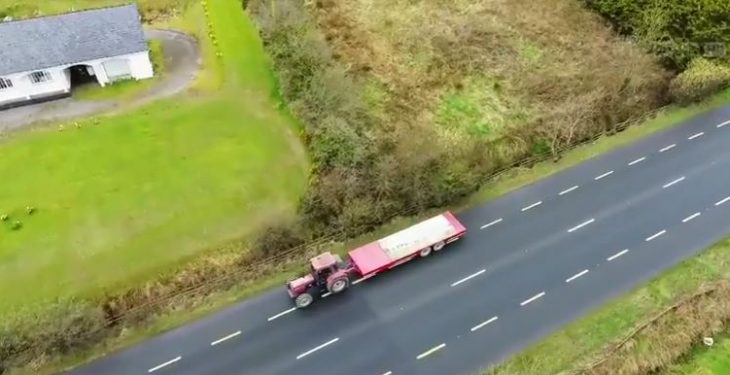 A man in Co. Cavan has confirmed his place in history after breaking the Guinness World Record for reversing a tractor and trailer.

Shalvey, whose family is hosting ‘Big Week on the Farm’ on its dairy farm in Cootehill, Co. Cavan, smashed the existing world record for reversing a tractor and trailer by an additional 2.8km.

Filmed last week, the farmer reversed his Case IH tractor, which is close to 30 years old, and trailer down the N3 in Co. Cavan.

Shalvey reversed the tractor and trailer for a total of 20.16km, breaking the previous record of 17.36km.

This record had previously been held by another Irish man, Eamon Hickson, from Co. Kerry. The Kerryman had held the record since 2014.

To qualify as a record, the entire journey had to be done in reverse using a commercially available tractor and trailer with no modifications.

The Cavan man was delighted to break the world record and thanked everyone for their support along the way.

It was very enjoyable doing it and I had great help along the road. It is fantastic to be able to beat Kerry in something.

“It took two and a half hours and my neck was a bit sore afterwards, but I had a bit of physio. It was worth it – to get that result tonight was really, really good,” he said.

Meanwhile, another Guinness World Record was broken on this series of ‘Big Week on the Farm’. Earlier this week, Cavan butcher Barry John Crowe broke the record for sausage-making on the opening episode.

Crowe made 78 sausages in 60 seconds, beating the previous record of 60. However, an attempt to break the world sausage-eating record the following night failed, when Cavan man Taz Smith fell short of the eight sausages in one minute required to beat the longstanding record.