Home » Rural Life » Video: Farming mad bride drives to her own wedding in a Massey Ferguson

Video: Farming mad bride drives to her own wedding in a Massey Ferguson

A farming mad bride got her lifelong wish when she drove herself to her own wedding in a Massey Ferguson tractor.

Aisling McCarey and Mark Graham, both from Co. Monaghan, got married earlier this month and their wedding was littered with high horsepower machines.

The bride had promised herself from a young age that when she was ready to tie the knot, she would arrive in style and that she would be behind the wheel.

Growing up on a dairy and poultry farm, McCarey became a very experienced tractor driver.

“I’m from a farming background and I’ve been driving tractors since I was about eight-years-old.

I live for the whole silage season and I love driving a tractor, so I said if was ever going to get married I’d be taking a tractor to my wedding.

The bride drove herself and her father to Knockatallon Church in a Massey Ferguson 6499 which has over 200 horsepower.

The rest of the bridal party also arrived in three other Massey Fergusons, two 6480s and a 6497 which were supplied by local agricultural contractor Tom Tierney.

Not to be outdone by his now wife, the groom organised that himself and his groomsmen would arrive to the wedding in two Scania trucks.

Coming from a farming background, the groom now drives a lorry for a living and helps out on the family farm when he can.

The wedding and the newlyweds choice of transport was all captured by photographer Manuel Lavery, who chose two Marty Mone songs to accompany the video, Slip the Clutch and Hit the Diff. 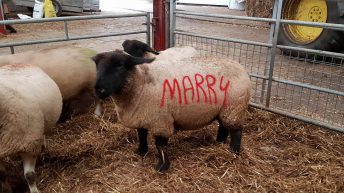