Home » Machinery » Video: How does a newcomer break into the tightly-wrapped Irish baler market?

Video: How does a newcomer break into the tightly-wrapped Irish baler market? 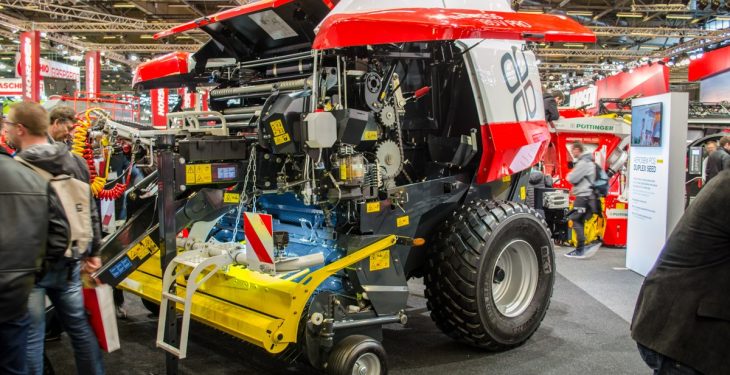 Pottinger has just recently launched its first own-design round baler – but can it pick up a sward of the Irish market? Those behind the machine are confident it can.

Many are curious about this machine. They descended on the Hunter Kane & Son open days in Ballycastle, Co. Antrim to see the 125 F Master. AgriLand went along to see what all the fuss was about.

By the end of the first night, the dealership had already sold the first such machine.

Eagle-eyed machinery fanatics may recall that Pottinger previously offered a Gallignani-built ‘RollProfi’ baler. However, that machine was designed for lighter conditions; it never made it to the UK or Ireland – certainly not in any meaningful way.

Diarmuid Claridge, general manager at Pottinger Ireland, explained that the new (own-built) machine is a natural progression of the manufacturer’s existing range. He reckons that its “more efficient” grass-flow system and a removable knife-bank sets this baler apart from other market rivals.

“In terms of crop-flow, other balers always feed the crop over the knives. We have changed that around, so we have the knife-bank above the crop-flow,” he said.

“There are two big advantages to that. One is that the crop is more easily fed into the chamber. The second is from a maintenance point of view; the whole knife-bank just slides out.

“So, with another baler you’d have to crawl underneath it to take the knife off. If the ground is wet early in the morning that’s your day off to a bad start already. In our machine, the whole knife-bank slides out – so you are working at a standard bench height.

“Those are two big things and they’re unique to us.”

Tests in England apparently show the machine operating at up to 27kph, albeit in ideal conditions.

The baler, which was designed and is built at Pottinger’s headquarters in Austria, also has a cam track type pick-up reel, with five tine-bars with a lateral float of 120mm.

But it’s not just a new toy for contractors; the machine comes in two options – a Master and Pro edition (with pick-up widths of 2m and 2.3m).

Two more machines will arrive within a matter of weeks (so more people can inspect them at close quarters). As for the ‘combi’ version, watch this space… 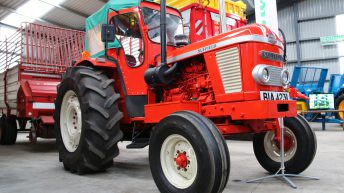 Why there’s one tractor this Co. Antrim dealer will never sell