Over 3,500 Christmas lights were used to create a Christmas farming display in Borrisokane, Co. Tipperary recently.

The inspiration for the display came to brothers Martin and Brian Toohey eight years ago and since then the project has gone from strength to strength.

The display was unveiled recently and will stay in place until early January, as the machines can’t be left standing idle for too long as there is plenty of work to be carried out, according to Martin Toohey.

“This is the eighth year we have done something like this. We just took it in the head one year and we said we wanted to do something different.

In the first year we just decorated a tractor on its own. We couldn’t believe the response we received, now hundreds of people come to see it every year.

Since then the Christmas display has gathered a huge following and it creates a great buzz in the community, especially for the children, Toohey said.

“The kids get a great kick out of it, everyone does. There is even a woman who is over 90-years-old who comes out every year to see the display,” he said.

The Toohey brothers have decided not to charge anyone who wants to visit the display, which is located just outside Borrisokane town.

Between 3,500 to 4,000 Christmas lights were needed to decorate the New Holland tractor and NC rear-discharge muck spreader, Toohey said.

There was seven of us who washed and decorated the tractor and muck spreader. Between washing and putting up the lights, it takes 60 man hours to create.

“A few family members and friends come to help out and we have great craic doing it. We know what we’re doing now, so it nearly takes longer to decide on an idea than to actually create it,” he said.

The display is created using LED lights, which aren’t too hard on electricity, according to the farmer and agricultural contractor. 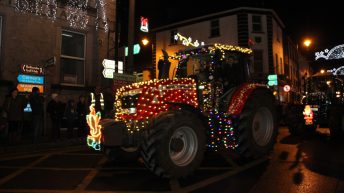 Pics: Tractors with Christmas lights wow crowds at parade in the west