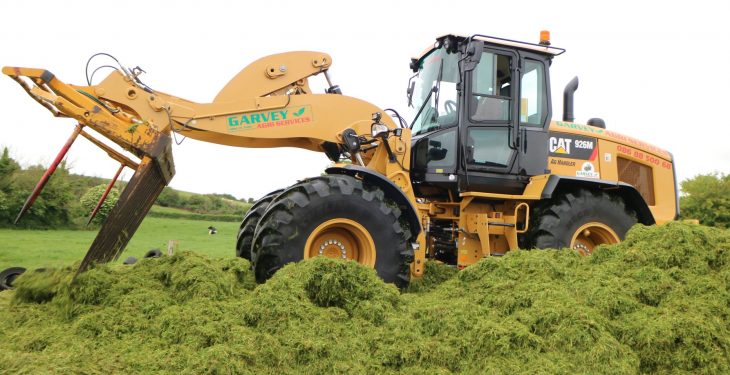 With silage fever having swept across the country last week, it was not at all uncommon to see large machinery out and about on the roads and in the fields. Anyone who knows their machinery brands will instantly recognise the usual forage harvesting suspects – such as Claas, John Deere, New Holland and, more recently, Krone.

On the pit (or clamp), it is definitely safe to say that the likes of JCB and Volvo are the most dominant brands in Ireland, with names such as Komatsu, New Holland, Case and so on gathering pace.

One brand which is not such a common sight on silage pits here is Caterpillar – or CAT as it is known to many. This is largely due to the fact that CAT is chiefly recognised as a construction brand; it probably didn’t focus too intensively on the Irish agricultural sector in recent decades.

However, this may be about to change. Finning – the largest Caterpillar dealer group in the world, which happens to have three depots on the island of Ireland among other places – has taken on some of the top salesmen in the agri machinery industry in a bid to build market share.

Clare-based contractor Tom Garvey was one of two contractors on the island of Ireland to make the change and opt for a new CAT loader for the pit this silage season. Garvey took delivery of a new CAT 926M ‘Ag Handler’, which replaced a Volvo L90. The L90 had previously replaced a JCB 434S.

Commenting on his decision, he explained: “We are a little bit unusual in that we went from two brands that are considered the main players and chose what might be seen as the ‘underdog’. The reason I decided to go for CAT was mainly down to fuel efficiency. In my business, the main cost is diesel, followed by labour and then machinery – so if I can get through the same volume of work but save 30% on diesel, for example, that equates to more money for me to invest back into the business.”

Before making the jump to CAT, Garvey contacted another contractor in the UK who operated both JCB and CAT loading shovels. He told him that the CAT is much more fuel-efficient than anything else he had tried; this ultimately made the somewhat scary decision a lot easier for Garvey.

So let’s take a closer look at what all the fuss is about. Firstly, standing back and looking at the 926M it is certainly not small; it weighs over 13t and sits on 750/65R26 Michelin Xbib tyres. With a 12ft-wide (folding) OCE fork up front, it does strike you as a machine that means business.

Under the hood lurks a 6-cylinder turbo-charged C7.1 ACERT engine, which shoves out 166hp (with boost). The engine is from Caterpillar itself. This powerplant meets Stage IV emission requirements, by using a ‘clean emissions module’ that consists of a DPF filter (designed to exceed the engine overhaul life) as well as needing AdBlue (which CAT claims only needs a re-fill for every four fuel fills).

A choice of operating ‘modes’ allows the driver to choose between maximum fuel efficiency or boosted power (along with hydraulic speed) to get the optimum balance between overall efficiency and performance. On the day Agriland visited, the machine was able to push up a full 12ft fork of grass at an eerily-quiet 1,800rpm. This contrasts sharply with some competing shovels, which need to be revved close to 2,200rpm to do the same.

Transferring power to the ground is the job of a stepless, electronically-controlled hydrostatic transmission, which incorporates adjustable ‘ground-speed control’. Performance on the pit, in tough or greasy conditions, is apparently further enhanced with fully-locking front and rear differentials. These can be engaged on-the-move at full torque, via a trigger on the seat-mounted joystick.

At the business end, the 926M is fitted with Caterpillar’s patented, optimized Z-bar linkage. It, says Caterpillar, combines the digging efficiency of a traditional Z-bar with integrated ‘tool carrier’ capabilities. Hydraulic power is supplied courtesy of a load-sensing, variable-displacement pump, which has a throughput of 150L/min.

Inside the cab, the operator sits in relative ‘luxury’ – with a host of ‘mod cons’ as standard including air conditioning and a reversing camera. All the major controls fall close to hand and are big and robust, giving you a sense that this machine is engineered to last.

Commenting on performance, Garvey said: “Although it’s early days with the CAT, I can already see the benefits of its fuel efficiency.

“My previous loader would use up to 12-15L of diesel per hour. The 926M is using 9-10L per hour, doing what feels like the same work. I am looking forward to putting a couple of thousand hours on it, to really see what it’s like.” 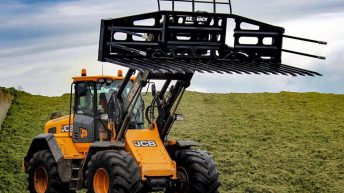 Video: Is this the largest buck-rake in the country? 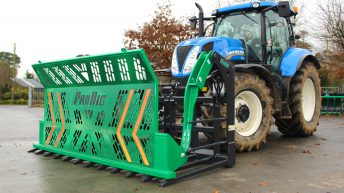 Tackling the silage: Tip and ‘flick’ or use this push-off fork?