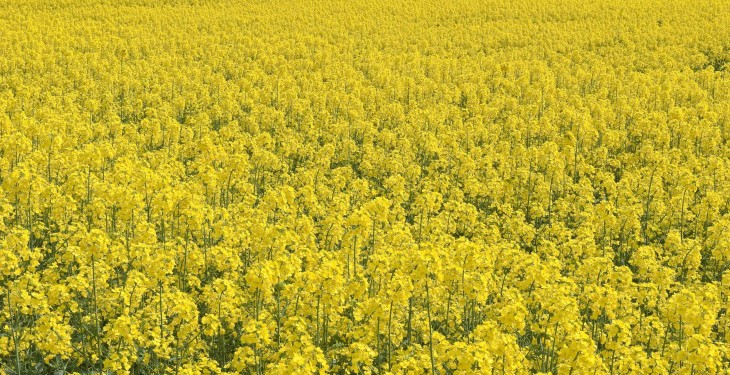 Elevated levels of erucic acid in double-low oilseed rape (OSR) crops are most likely to be the result of contamination by high erucic acid volunteer crops.

Rapid ways of assessing erucic acid levels at intake have also been found to be unreliable, compared with traditional methods.

With the European Commission set to reduce the legal limit for erucic acid in food products from 5% to 2%, farmers are being urged to follow industry guidelines to manage the risks and potential disputes.

The latest developments have been published in a new AHDB report. Based on NIAB-led research, the publication describes how OSR can become contaminated, and outlines the most robust methods of detection.

Seed samples were sourced from commercial oilseed rape crops at harvest 2017. From these, a subset (50 x 250g) of samples, with a range of erucic acid values, was used to compare a relatively rapid method of testing levels with the traditional method.

Near-infrared spectrophotometer scanning (NIRS) techniques are rapid because they can be used at intake on whole rapeseed. The traditional method uses extracted oil and gas chromatography (GC) techniques.

Over the full erucic acid range (0-40%) detected in the study, NIRS gave a test accuracy very close to that of GC analysis. However, NIRS accuracy was found to be significantly reduced at the critical 0–5% ranges, with ‘considerable inaccuracy’ at the 0–2% range.

Dhan Bhandari, who manages grain quality research at AHDB, said: “NIRS can give false results. It can show that loads have exceeded threshold values, when GC tests show that this is not the case. NIRS is getting better all the time but, particularly at lower levels, it lacks the accuracy of GC methods.”

Oil-bearing and potentially high erucic weed seeds were also looked for in the samples. Weed seeds were not found at levels that could have caused significantly elevated erucic acid levels. Tests on individual weed seeds, however, confirmed the high-erucic status of some species.

On a subset (12 out of 50) of samples, testing of single seeds confirmed the stability of the low erucic acid genetic trait.

The range of levels detected was consistent with that expected as a result of cross-pollination with high or elevated erucic acid volunteers or – in the case with the highest levels – the presence of high erucic (HEAR) varieties in the double-low crop.

Leaf tissue taken from volunteer plants in commercial OSR fields in 2018 was tested for the presence of a high erucic acid gene.

By combining the test results with the levels measured in the crops at harvest, the researchers confirmed that a field-level test for erucic acid contamination risk from volunteers could be developed.

Guidelines to minimise the risk of erucic acid in double-low oilseed rape and further information on the research project can be accessed on the AHDB website.