What other EU governments are doing to help their farmers

Fed-up Irish dairy, grain and pig farmers took to the streets of Dublin recently to protest about the low prices they are receiving for their produce and low farm incomes.

It is an EU-wide problem and next week there will be an extraordinary meeting of EU agriculture ministers in Brussels.

The Irish Government has not announced any support for Irish farmers, however the French, Spanish and Belgian governments have introduced measures to help their struggling farmers.

In July thousands of French farmers caused gridlock on the country’s roads in protest against low prices for their produce.

The French Minister for Agriculture, Stephane Le Foll, has said that there is an agricultural crisis and 23,000 French farmers are on the verge of bankruptcy.

Le Foll and the French government reacted with an injection of €600m into the sector to support struggling farmers.

In Spain, the government has announced grant direct aid of €300/cow for farms that are selling milk below profitability.

The Spanish minister for agriculture, Isabel Garcia Tejerina, estimates that this aid could benefit 2,500 to 3,000 farms.

This initiative responds to a request to the ministry of agriculture from the Spanish Young Farmers Association.

The Belgian government has also allocated €76m to dairy and pig farmers in short-term aid to help alleviate a financial crisis in the sector, the Belgian Federation for Commerce and Services trade federation, Comeos, announced this week.

In the coming months, Belgian dairy farmers will receive €46m in emergency aid, which works out at 2.7c/L. Pork farmers will be given €30m in aid.

It said that Belgiums agriculture sector has shown the rest of Europe that the old Belgian adage; ‘unity creates strength’ remains true today.

The approval of the Belgian Competition Authority is required for the agreement and the measure will also be discussed at extraordinary meeting of the Agriculture Council of the EU on September 7. 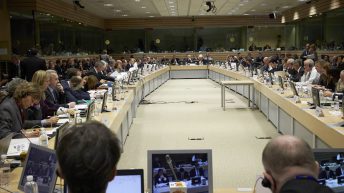