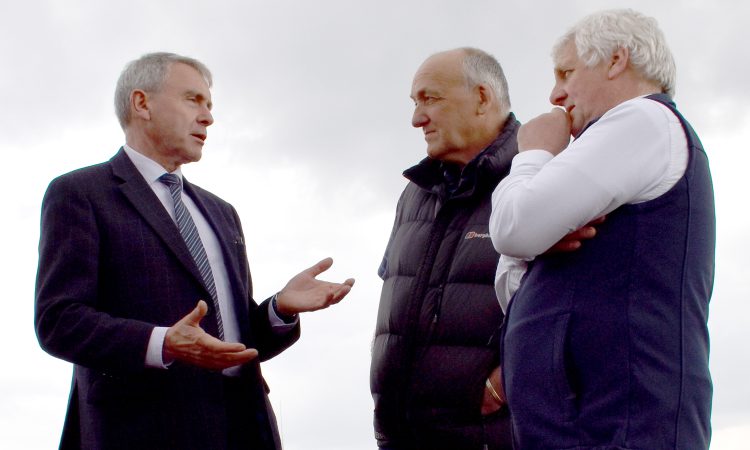 On his first visit to Wales, the UK’s new Minister for Agriculture was warned that work on a UK framework for agriculture is still essential, despite the collapse of the Government’s Brexit policy.

Farmers’ Union of Wales (FUW) president Glyn Roberts met with the Minister of State for Agriculture, Fisheries and Food Robert Goodwill MP, at the farm of Brian Bowen in Princetown, South Wales on Monday (April 29).

Speaking after the meeting, Roberts said: “Whilst the failure to get an agreement on the UK’s withdrawal from the EU has been the main story in recent months, we also brought a number of other critical issues to the attention of the Minister.

“This includes the need to ensure that we have frameworks in place which enable, yet also constrain, UK Governments.

We need bespoke policies suited to each country, whilst constraining policies that might dangerously disrupt the UK home market.

Roberts referred the minister to the FUW’s comprehensive discussion document ‘Filling the Void – steps towards a post-Brexit UK policy framework’.

The report suggests that an “unprecedented legislative void” could be created post-Brexit which could allow significant policy divergence between the UK’s four nations.

“This is likely to result in market distortion and unfair competition, causing significant disruption to the functioning of the UK’s internal markets and supply chains,” said Roberts.

“We emphasised the need for agreed frameworks to prevent this and to secure and protect long term funding for agriculture, whilst respecting devolved powers and the need for flexibility which allows national governments to make decisions appropriate for their regions.

Being free from the clutches of the CAP should not mean that each country is free to do as it wishes irrespective of the impact on other UK nations.

The union also identified it’s Fair Farm Funding campaign for Wales to receive a financial settlement for agriculture that is akin to the CAP allocation and is not Barnetised.

“We welcome the UK Government’s indication that this is their intention, but we need to know that any funds allocated to agriculture remain ring-fenced – something that former First Minister Carwyn Jones also emphasised,” Roberts added, saying that the meeting on Monday had been “very positive”.