Home » N.Ireland » Young Farmers get geared up for Balmoral Show: Here’s what they have lined up

Young Farmers get geared up for Balmoral Show: Here’s what they have lined up

From sheep shearing to pencil-making and agri-business talks – the Young Farmers’ Clubs of Ulster (YFCU) has a packed Balmoral schedule.

Here’s what you can expect to see over the four days of the show if you call by the YFCU stand:

The young farmers’ programme kicks off on Wednesday, with its hotly-anticipated sheep shearing competition. The contest, which is sponsored by Lister, will take place at the sheep shearing arena.

In the weeks before, members will have undergone a tailored training course allowing them to perfect the art of shearing, before taking to the Balmoral Show stage to battle it out for the 2018 YFCU Balmoral Show title.

Afterwards, if you stick around in the shearing arena, the YFCU final of the floral art competition will take place.

This year’s competition has the theme ‘duet’ and promises to bring colour and creativity as members work on perfecting their floral masterpieces for the judges.

On Thursday, the YFCU programme will begin with machinery handling.

This popular competition, which is sponsored by Johnston Gilpin, will see a number of YFCU members take it in turns to sit in the driving seat and take on a pre-planned obstacle course.

HSENI will also be on hand to oversee the health and safety aspect – which is an important part of the machinery handling competition.

Following this, the YFCU girls’ football teams will then take to the cattle rings for the competition final.

A total of 14 teams will compete for the winner’s title at Balmoral Show again this year.

The competition, which is sponsored by Thompsons, will see a selection of novice and advanced teams go head-to-head in the hope of being crowned winners.

On Friday, Ulster Wildlife is coming along at 12:00pm to provide members with an interactive pencil-making workshop and later in the afternoon, Glastry Ice Cream will deliver an agri-business talk.

On Saturday after lunch visitors can take in the talents of Annaclone & Magherally YFC member James Boyd who has made a name for himself as the newest face on the country music scene.

There will also be the opportunity to take part in the Farm Safety Partnership’s ‘Farm Safe Treasure Trail’ with one of the clues on the Young Farmers’ stand. Entrants will have the chance to win an iPad. 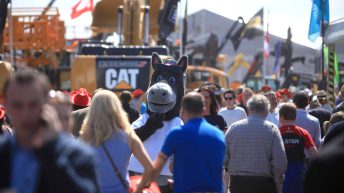 Landmark 150th Balmoral Show to be biggest to date