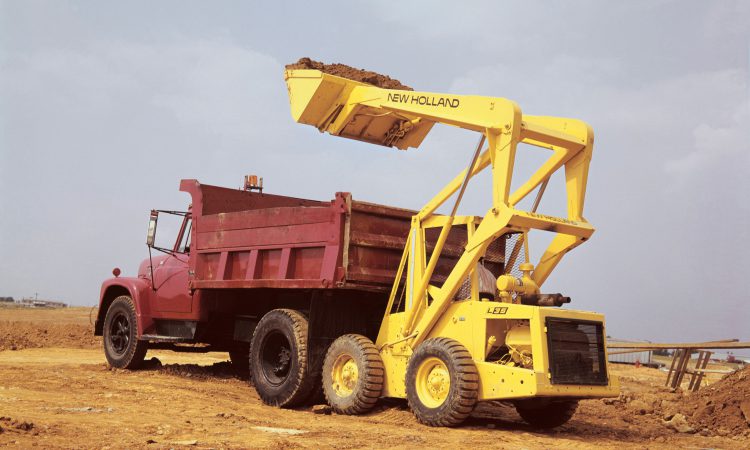 It was in 1971 when New Holland built its first skid steer loader. The original machine was based on a mower suspension design that had been turned on its side to provide both lift and and reach.

The first machines were powered by a Wisconsin four-cylinder petrol engine that provided 37hp. The transmission was a hydrostatic unit produced by Vickers (now part of Eaton) and the weight of the bare machine was 2,009kg.

New Holland claims that the L35 was the first loader of its type to offer both roll over and falling object protection, when introduced.

The company also notes that since the first model, it has focused on improving the functionality of its range of skid steer loaders.

Design improvements are aimed at reducing cycle times, extending reach and load capacity as well as extending the choice of machines available.

Presently, the 300 series of loaders range from 60-90hp with ‘operating capacity’ stretching from 815kg to 2,045kg. Visibility and operator comfort have also been improved over the years.

To mark the occasion of the machine’s 50th birthday a celebratory decal will be applied to the back of each new loader from mid-June.

Elsewhere in the New Holland stable, there has been an overhaul of the Boomer range of compact tractors.

All the tractors are now Stage V emissions compliant and two further models have been added. The first is the Boomer 45 which offers 47hp, while the second is the 57hp Boomer 55.

The Boomer 55 brings the compact range right up to the power ratings of the New Holland T4 models which start at 55hp. This introduces a choice between a compact type or a small conventional tractor in the 55-60hp bracket.

Models fitted with hydrostatic transmission are now available with the EZ speed function.

This coordinates the forward hydrostatic pedal and engine speed. When the operator activates the system, and the hand throttle is set in the low position, the engine will automatically speed up when the hydrostatic pedal is pushed.

A feature new to the range is automatic PTO (power take-off) disengagement. When selected, it automatically turns the PTO off as the three-point hitch is raised and re-engages when it is lowered.

The 3-cylinder turbocharged engines feature common rail direct injection and on the Boomer 55 model, will deliver a torque back up of 188Nm at 1600rpm. A larger radiator and cooling fan further increase the engine’s efficiency.

The after-treatment system has a new continuously regenerating trap, as well as a Diesel Oxidation Catalyst and Diesel Particulate Filter.