Home » Arable » Desiccating potato crops: What are the options in 2021?

Desiccating potato crops: What are the options in 2021? 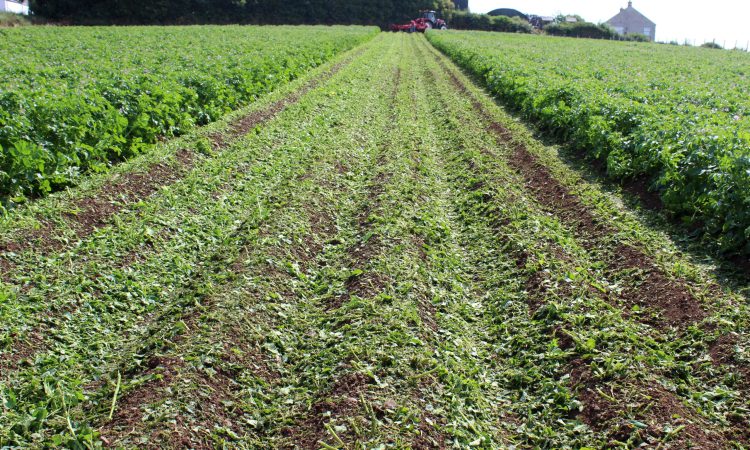 With diquat no longer available (Northern Ireland or Republic of Ireland), Irish potato growers will have no option but to look at other crop desiccation options over the coming weeks.

This issue was the focus of a farm demonstration, hosted by the College of Agriculture Food and Rural Enterprise (CAFRE) at its Greenmount farm in Co. Antrim this week, which Agriland went along to.

He said: “The destruction of the haulm is important when it comes to controlling tuber size. This is particularly so for those farmers growing seed, salad potatoes or supplying supermarket contracts.

“Taking the tops off also controls disease within a crop. Blight is one of these but there are also a number of viruses that can attack potatoes.

“In the past sulphuric acid was used to desiccate potatoes with diquat, the last in the list of chemicals with a similar mode of action.”

What desiccation options are currently available?

With diquat out of the way, what are the desiccation options now open to Irish potato growers?

Leigh McClean explained: “Spraying with PPO inhibitors only, is an option. This option has been used over the past couple of years in GB [Great Britain], where they have less rainfall and can enjoy the prospect of better weather in the lead up to harvest.

“However, experience with these products indicates that they work best when crops have already started to senesce.

PPO inhibitors are forms of herbicide, which work by disturbing plant cell membranes.”

The CAFRE representative went on to point out that PPO inhibitors will work on later season, ware crops.

But anyone wishing to take down seed or salad crops, which would still be demonstrating vigorous growth, other haulm control options should be looked at.

McClean confirmed the use of physical haulm destruction techniques in this context.

He explained: “This leaves flailing as a follow-up to the use of PPO inhibitors. Straight mechanical flailing, followed by digging, is an option where first earlies are concerned.

Root cutting, where basically a big slice goes under the crop is another option. One downside to this approach is the fact that it disturbs the soil significantly.

“This can lead to problems during the subsequent harvesting operations, particularly if this takes place during periods of very changeable weather.

Haulm pulling is an option that is currently being assessed. But, again, it requires a machine to be driven through the crop,” he added.

“Gas burning is the final option. It may prove attractive for organic potato growers. However, the significant cost involved would not make it a feasible approach for commercial producers.”

According to McClean, the use of PPO inhibitors only, requires a fair bit of forward planning on the part of growers.

Avoiding late nitrogen (N) application is strongly advised as this encourages haulm growth late in the season. High water volumes are required, up to 400L/ha when using PPO products.

PPO inhibitors work on the basis of plant contact only, so a high level of their distribution throughout the crop is required to get a good kill.

Spraying should take place during the late morning or early afternoon on a bright day. There will be a programme of sprays required.

McClean continued: “At least two PPO spray mixes will be required to get the level of crop control required.

The advantages of spraying include the fact that the grower does not have to purchase additional equipment. Sprayers can also travel across fields if ground conditions have started to deteriorate somewhat.

“Sprayers can also deliver higher work rates, when compared to a flailing option. The downside is that PPO inhibitors will only work well if the crops have started to senesce. Bright and warm conditions are also required to facilitate their mode of action.”

Flailing, on the other hand, delivers immediate crop management control.

E.g. the removal of the haulms does not give aphids a subsequent opportunity to transmit viruses into the crop.

“The downside to flailing is the additional capital cost involved and the greater disposition of crops to physical damage.”

A team from Grimme Ireland was on hand to demonstrate the suitability of that company’s topper range to flail potato crop canopies.

Specifically featured was a six-row KS 5400 machine, weighing 1750kg and requiring a 110hp tractor to drive it.

The topper can be front or rear mounted. It acts to physically crush the haulm of the potato plant, depositing the trash between the rows.

The flails within the machine act against a shear bar in order to chop the haulms up.

This action fully exposes the remaining potato stalks to subsequent sprays that may be applied by the grower.

Grimme staff confirmed that the topper can be maintained on a straightforward basis by the user. However, flails will need to be changed on a regular basis.

The topper’s drive has been designed for high haulm amounts or high driving speed. Large diameter flail shafts ensure a good suction and flailing quality on and between the rows.

According to Grimme’s Cecil Morgan, the company has sold 40 of these machines over the past decade, and demand is growing.

He said: “We have already delivered 10 machines to customers across the island of Ireland this year with four more on order. The six-row machine sells at €28,000 or £25,000.”

According to Grimme, the topper is eligible for Targeted Agricultural Modernisation Scheme (TAMS II) support.

A CAFRE representative confirmed to Agriland that strong arguments have been made to have toppers made eligible for the next round of Farm Business Improvement Scheme Tier 1 (FBIS) funding.

CAFRE staff also confirmed that a number of haulm topper options, from various manufacturers, are available at the present time.