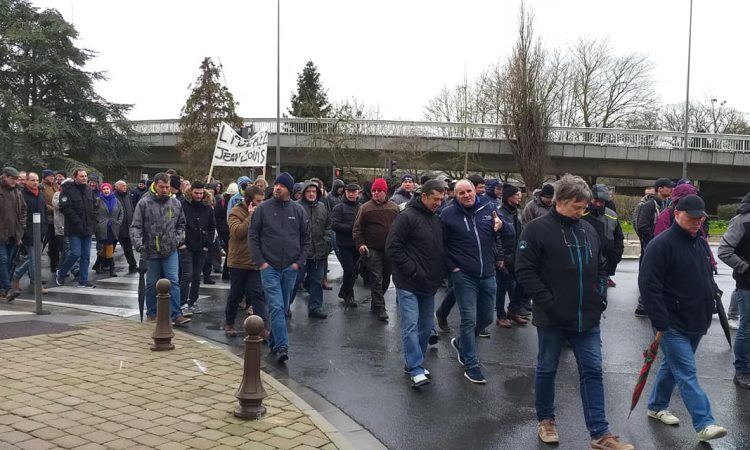 Hundreds of farmers took to the streets in protest in the city of Reims in France yesterday, Thursday, February 13, calling for the release of a farmer who shot a teenager in an incident on his farm last month.

Members of the Fédération Nationale des Syndicats d’Exploitants Agricoles (FDSEA) farm organisation held the demonstration at the Reims Court of Appeal in support of Jean-Louis Leroux.

Leroux, according to the BBC, is being investigated for attempted murder, and purportedly admits firing a shotgun at people he believed were trying to steal fuel from his farm.

A 19-year-old was hit and is reported to be “in a coma in hospital but now out of danger”.

In a statement on the matter ahead of the march, which took place this morning, Thursday, February 13, the FDSEA highlighted that Leroux has been a “victim of dozens of thefts since 2015” prior to the incident, which took place on the night of Friday, January 31.

The FDSEA statement said: “Our thoughts are with the two families concerned and their loved ones who are living in a terrible situation. We extend our sincere wishes for recovery to the injured young man.

“Jean-Louis Leroux is currently in pre-trial detention at Châlons-en-Champagne prison. His lawyer appeals this decision and requests a provisional release pending the trial.

“The FDSEA 51 and the Young Farmers of the Marne call all the stakeholders of the rural world to participate in a support walk for Jean-Louis Leroux and his family, a calm walk in respect for people and property.

The insecurity in our rural territories is no longer bearable.

“Is it up to Jean-Louis to bear sole responsibility for it?” the farm organisation asked.

“The public authorities must act to reassure the population and ensure their security,” the FDSEA statement concluded.

Following the demonstration today, this evening it was revealed that Leroux was released and is now free until his trial.

Describing the news as “a huge relief for him, his family and everyone who supported him”, the farm group thanked all who participated and supported the march, stating:

“We will continue to accompany him – the investigation of the case has just begun.”