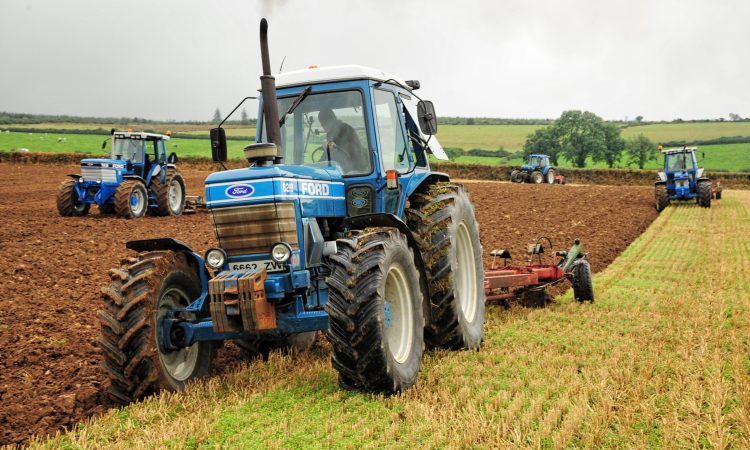 Austin Rothwell is a self confessed Ford tractor fanatic, especially those models with six cylinders under the bonnet, although he is partial to anything in the famous blue livery.

Each year he holds a couple of private events at his farm in Co. Kilkenny to which he invites fellow enthusiasts to work their tractors on his land.

During the summer, he holds a silage day but come early autumn, when the fields have been cleared of crops, it’s time to get the ploughs out and start turning the land.

To help in this happy task, there usually arrives a good crowd of tractors and their owners to pull the assorted implements across the 16ac he sets aside for the occasion.

This year the numbers were back a little, but there were still over a dozen machines at work, all of them from the era of raw diesel glory, when advanced electronics meant two speed wipers and personal data was one’s entry in the telephone directory.

This period spanned the years between the emergence of the modern tractor with a standardised system of linkage and power take off (PTO), to the cusp of the digital tsunami which brought us up to the point where manufactures talk more of connectivity than they do of power output.

Take a look at the classic tractors in action in the video below.

It could be argued that the early 60s marked a major shift in tractor design; John Deere abandoned the horizontal two stroke, International was going great guns with the B450 and Ford moved on from the Major and Dexta, with a brand new range known as the 6X models.

The idea was right but its execution left much to be desired, that is until the heavily revised 6Y, or Ford Force, machines arrived and became a firm fixture of the farming landscape.

One of the great successes was the Ford 5000 which appeared with 75hp and went on to become a best seller.

Later, it was decided to bolt a turbocharger to the 5000 and strengthen the engine internals to cope with the 94hp it now developed.

Quite who thought of the idea is open to debate, but the world was introduced to the resulting Ford 7000 in 1971.

If ever there was a tractor range which which stood out from the crowd as a symbol the increasing power being brought to farming in the last quarter of the 20th century then this is it.

The TWs were all based around the 401 six-cylinder engine which had appeared in America powering the 100hp Ford 8000 in 1968.

There were several TWs on the field and their sharp-edged styling gives them an unmistakable presence which modern tractors, with rounded curves, tend to lack.

By the late 80s the TW’s were falling behind the competition and to breathe new life into the range, Ford fitted a power shift transmission from Funk in the United States and renamed it the 30 series, although it had already had a 30 series of smaller tractors.

It certainly seems to have impressed John Deere which bought out Funk within a year, thus ensuring it had control over Ford’s supply of gearboxes in this growing power segment.

We often think of tractor technology as only that which is found in the cab, but computing has had a vast influence on the way that tractors are designed and built.

The end of the line

In 1986 Ford bought Sperry New Holland to form Ford New Holland. In 1990, Fiat acquired an 80% stake in the company and so Ford ended its long association with tractors to concentrate on the automotive market.

The plans for the latest range of Ford tractors were well under way by this time and due to Fiat wanting an easy transition to the New Holland branding, they were still labelled Fords despite being launched in 1991.

The rise of New Holland

Although Fiat had a long and proud history of tractor production dating back to 1918, the company was aware that there was a mismatch between the perceived quality of Ford and Fiat in the market.

The New Holland name was therefore chosen as a neutral brand that already had strong roots in the important North American market.

The famous Ford oval badge was last used in August of 1994, although the name still lingered on the bonnet, to reassure customers that the engineering remained the same behind the new name.

In the end there was little or any disruption to sales due to the transition, and the spirit of Ford lives on in the guise of New Holland.

It is thanks to the incredible generosity of enthusiasts such as Austin, that we are still able top enjoy seeing the products of the Ford tractor division, which left an indelible mark on the farming scene over the years.