Claas, the German machinery manufacturer, has unveiled the latest additions to Quadrant and Variant baler ranges.

The company has launched three new Quadrant square baler options for the 2017 season, these include the Claas Quadrant 5300, 5200 and 4,200 models.

According to the company, the new balers will take over from the Quadrant 3300, 3200 and 2200 models and will provide higher throughput and greater bale density.

The new models also have the option of hydraulic drive to the pick-up and feed system and a completely new knotter system.

The German-based company has also added four new Variant variable chamber balers to its 2017 line up.

The Variant models have been upgraded to allow for faster bale tying and ejection, while improvements have also been made to the net feed system.

This allows for improved crop flow through the baler, while the new models are also fitted with a new Roto-Cut system.

Claas recently marked a major landmark as its 50,000th Lexion combine rolled off the production line.

According to Claas, the high capacity Lexion combine harvester has become the flagship of international agricultural technology over the past 21 years.

To maintain this position, the machinery company has launched the new range of Lexion 600 combines, that are equipped with output boosting technology which was previously only available on the higher capacity Lexion 700 range.

Under the bonnet, the new Lexion 600 series is fitted with a Mercedes-Benz T4F engine, while power-saving Dynamic Cooling is now available on the larger models.

The company also says that the larger models feature a new straw chopper, while the range has been extended with the addition of a tracked version of the Lexion 660 combine. 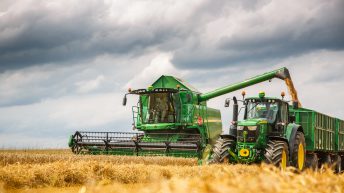 Before you put the combine or baler back in the shed, here’s how you should store it 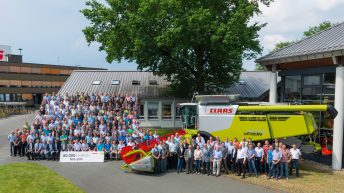 Claas marks major landmark as the 50,000th Lexion combine rolls off the line