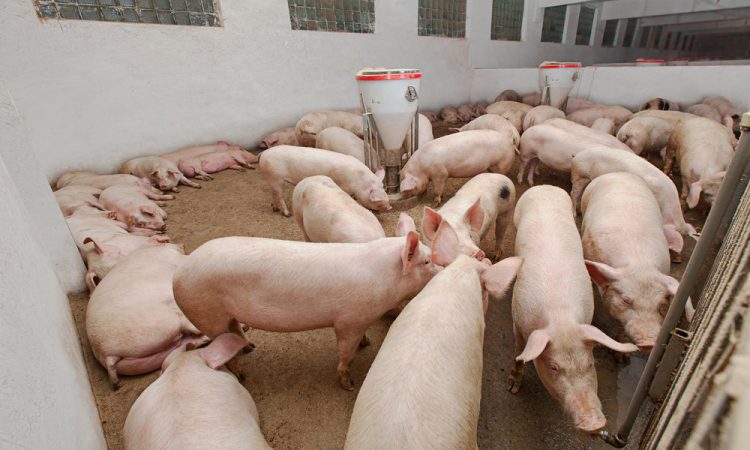 Yesterday morning (Sunday, July 29) Nigel Grant was doing his routine jobs on the farm when he went into one of his pig-houses and noticed, much to his dismay, that over 70 pigs appeared to have vanished.

Speaking to AgriLand, Grant – who is a pig farmer from Aghalee, Co. Antrim – said: “I went into the pen yesterday morning at 11:00am and noticed the pigs weren’t there; the floor had collapsed.”

There were 80 pigs in the pen, weighing about 100kg each, and Grant said there were only five or six in the pen when he went into the shed.

About 75 pigs had fallen into the tank and about 73 of them were saved.

Grant explained that the concrete head, on which the slats were sitting, broke and gave way – causing two rows of slats to collapse and fall into the slurry tank below.

Grant was quick to react when he realised what had just happened.

“I steadied myself for two or three minutes and said to myself ‘well, this is a fire brigade job’,” Grant added.

He immediately told a neighbour to contact the emergency services, while he prepared a rescue plan.

When the emergency services arrived they went through all the protocols and checked the gas levels, then began the rescue operation.

Authorities are now claiming that it was the largest animal rescue operation in the history of Northern Ireland.

Grant explained there were 2-3ft of slurry in the tank during the mission, adding “it wasn’t that pleasant of a job”.

The pig farmer explained that a steel ramp was put into the tank and the pigs were pulled up the ramp using a rope.

He added that he couldn’t praise the animal rescue and emergency services enough and outlined that he would also like to thank Derek and all the management staff at Malcom Keyes. Grant is contract rearing the pigs for Malcom Keyes.

Grant also expressed his thanks to friends and neighbours who also helped him out on the day.