A closer look at McCormick’s big guns…new and old 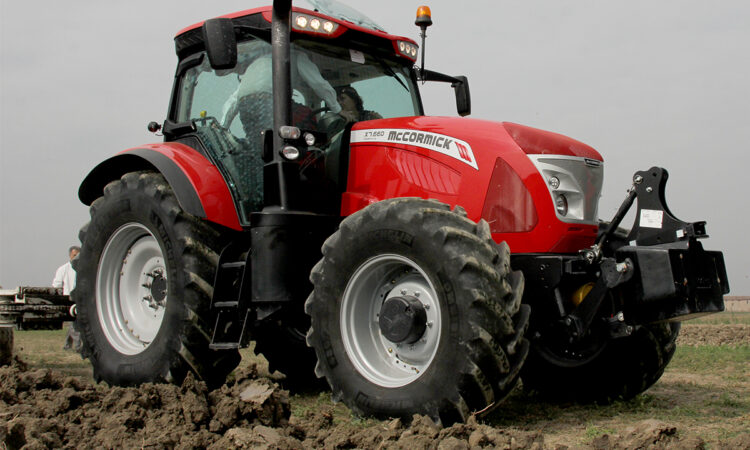 McCormick recently rolled out a package of upgrades for its X7.6 family of tractors, including the addition of a X7.690 model. Here, we briefly outline those latest developments – and look back at the some of the firm’s previous ‘big guns’ from the past.

Buyers can opt for either VT-Drive (a continuously variable transmission up to 195hp) or PS-Drive (a powershift transmission up to 226hp). The latter has been entirely redesigned, according to McCormick. Its five robotically-activated, electro-hydraulic ranges and six powershift speeds are fully controlled by a dedicated electronic unit.

Once a desired engine speed has been chosen by the operator, the ‘Smart APS’ (Smart Autopowershift) system allows the transmission to automatically select the most suitable range and gear.

The X7.6 Series also features a ‘Stop & Action’ system, whereby the tractor de-clutches when the operator simply steps on the brake pedal. According to the firm, this gives PS-Drive some of the benefits and ‘feel’ offered by VT-Drive.

The biggest model boasts 310hp. Two smaller models also feature in the line-up, with power outputs of 264hp and 286hp. All feature a 4-stage continuously variable transmission with a 40kph (ECO) top speed at just 1,300rpm or a 50kph top speed at 1,600rpm.

These are high-tech tractors; they are pre-wired for ISOBUS and a 12in touch-screen monitor is standard inside the cab.

The closed-centre hydraulic system, courtesy of its load-sensing pump can deliver 157L/min; a 212L/min version is optional. Up to 10 electro-hydraulically controlled spool valves can be specified – with up to six of these at the rear. Rear 3-point linkage capacity is up to 12t. The standard front linkage can hoist 5t. A front PTO (1,000rpm) is optional.

The front axle has an electronically-controlled, central-pivot suspension system and its own oil-immersed disc brakes.

As for the styling cues, McCormick says that the X8 “marks a further evolution of its modern family feeling”.

The X8 is not McCormick’s first foray into the high-horsepower tractor market.

With up to 280hp on tap, derived from a Cummins QSC 8.3L 6-cylinder engine, the firm’s lesser-spotted ZTX was fitted with a (18F 8R) Funk full-powershift transmission. There were three models in the line-up – the ZTX230, ZTX260 and ZTX280.

These tractors first appeared during the early-to-mid 2000s. The product line was discontinued after a relatively short time; perhaps the incoming X8 will give McCormick a new lease of life in the 250hp+ sector.

Of course, Argo Tractors – the owner of McCormick – has toyed with other high-horsepower product lines in the past. Argo doesn’t just encompass McCormick; it is also owns Landini.

The Starland tractor line-up was a blue-liveried offering, which brought Landini up to about 270hp – into a market segment in which it previously did not have a presence. Like the McCormick ZTX, it first appeared around a decade and a half ago. It was a short-lived project – as Landini was not quite ready to mount a head-on assault on that end of the market.

In reality, the Starland was not actually built by Landini. As is clearly evident from their outward appearance, these tractors were built for the Italian company by Canadian-based Buhler Versatile. The latter’s Canadian factory, then under different ownership, previously built the well-known Ford / New Holland 70 (Genesis) Series (spot the uncanny resemblance). A significant number of these are still working across the UK and even here in Ireland.

Interestingly, that Canadian-built ‘family’ of tractors was offered in a total of three different corporate liveries – in the guise of Landini’s light blue Starland, Ford / New Holland’s 70 (Gensis) Series and Versatile’s (and later Buhler’s) own reddish-brown models.

Versatile launched its first tractor way back in 1966. Most recently, it was taken over by Russian harvester giant, Rostselmash, in 2007. For more on that story, read our profile of that company.

Also Read: Will these Russian forage harvesters make it to Ireland?

Who or what is Argo?

Argo Tractors, which was established in 2007, is a subsidiary of the Argo Group.

It has a production capacity of more than 22,000 tractors per year. Encompassing the Landini, McCormick and Valpadana brands, Argo Tractors is one of the key players in the tractor business in Europe.

Production derives from a number of factories; the Doncaster plant that was associated with McCormick for many years closed in 2007. The Wheatley Hall Road facility had been a hub for the manufacture of agricultural equipment for the previous six decades.

Case IH operated the plant since the mid 1980s, but had to sell it in 2000 to obtain European Commission clearance for its tie-up with New Holland. Just months later, in early 2001, McCormick tractors rolled off the lines.

Nowadays, Landini, McCormick and Valpadana tractors are manufactured in Italy, in factories at Fabbrico, San Martino and Luzzara. The R&D and engineering divisions are located in the main headquarters at Fabbrico (Reggio Emilia) – the traditional home of Landini.

In San Martino, Argo Tractors also has a major parts center, which distributes Landini spares in Italy and abroad. In Saint Dizier, France, there is another parts centre – for the worldwide distribution of McCormick parts.

Argo Tractors now reaches into markets all around the globe through nine subsidiaries and 130 importers. Here in Ireland, its brands have long been represented by Dublin-based D&S Machinery.