A transition cow can be identified as a cow three weeks' pre-calving and three weeks' post-calving. Dairy cows face many physiological challenges during this time.

This period is characterised by marked changes in the endocrine status of the animal. There is a reduction in feed intake when nutrient demand for an unborn calf and the impending lactation are increasing.

Production disease of dairy cows often associated with the transition period are:

Correct management of cows during this time-period is vital to ensure a successful transition from late-pregnancy to early-lactation. 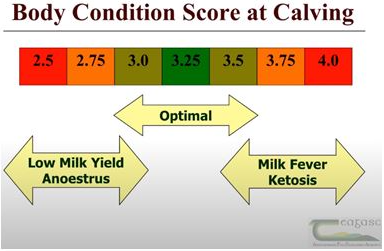 At-risk animals in the lead up to calving are those above and below body condition score (BCS) target.

These are animals who have an increased risk of metabolic disorders. Even slightly over-conditioned cows are less fertile in the following lactation.

Allocation of feed based on BCS where possible may mitigate the risks caused of being over or under-conditioned in the lead up to calving.

The risk of milk fever is reduced if dietary calcium levels can be maintained below 0.5% of dry matter (DM) before calving.

A prevention approach to reduce the occurrence of production-related diseases is better than dealing with the issues once they have occurred.