More than 100 fly-tipping incidents are thought to have occurred across Scotland since the start of the lockdown amid reports calf in West Renfrewshire has choked to death on litter.

At the time of publication, not all regions had reported back. However, NFU Scotland estimated a total of between 80 and 100 cases reported to it since lockdown.

However, a spokesman explained that the shocking figure only reflected a proportion of the incidents.

"There will have been many more – the main point of contact for farmers reporting such incidents is the local authority rather than NFUS," he said.

Thes spokesman explained that household waste, unwanted furniture and appliances and DIY remnants were among the most popular finds in fields, laybys, and country roads.

However, explained that increasingly, garden waste has also been getting dumped.

"That poses a huge risk to the health of livestock," he said.

Reports this week included the death of a young calf in Lochwinnoch, West Renfrewshire, that choked on a crisp bag; as well as domestic and garden waste appearing in the countryside across the nation and ground care workers dumping cuttings and clippings from a local cemetery straight into a farmer’s field next door.

Five of Scotland’s leading rural and environmental organisations – NFU Scotland, Scottish Land and Estates, Scottish Partnership Against Rural Crime, Keep Scotland Beautiful and Zero Waste Scotland - issued a joint statement recently in relation to the rise in fly-tipping during the Covid-19 pandemic but the situation is deteriorating. 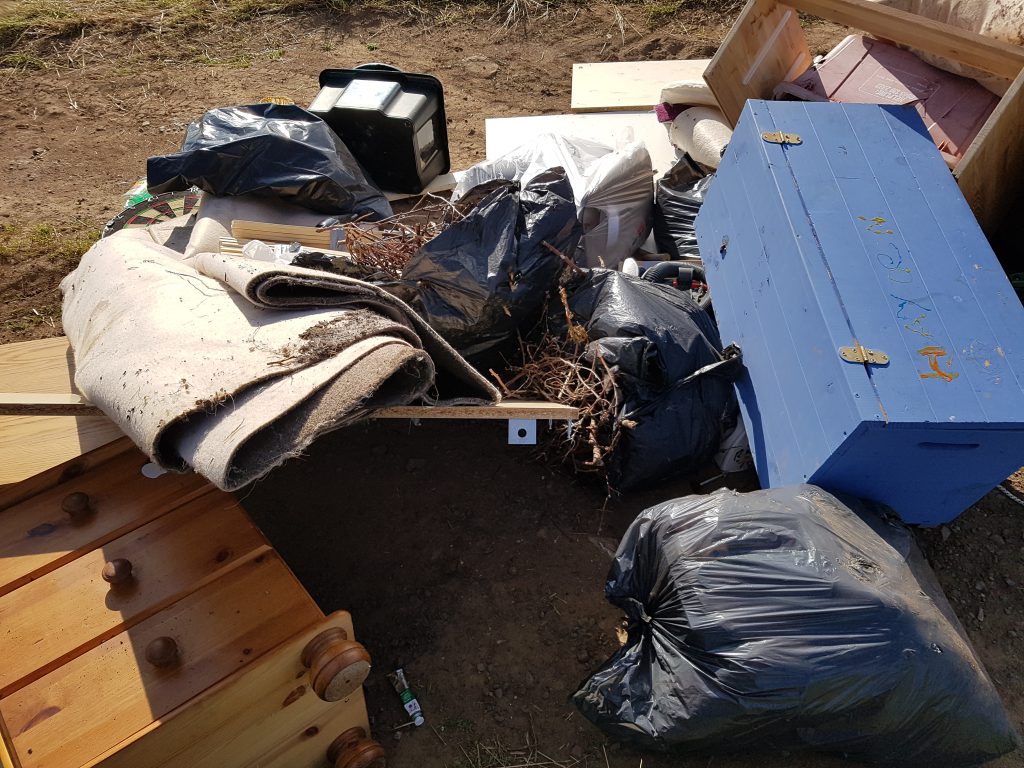 NFU Scotland animal health and welfare policy manager, Penny Middleton, said: “It is so disappointing to see people continuing to use our beautiful countryside as a giant tip but, with the upturn in the weather and people working in their gardens, the surge in garden waste being dumped will result in animals dying.

“Litter and waste of any kind can cause hazards for livestock and wildlife, so dumping it in the countryside or on farmland is extremely dangerous.

The distressing report of a young calf choking on a crisp bag is dreadful but highlights just what impact such reckless behaviour can have.

“Animals are naturally curious and will investigate foreign objects left in their environment. Hazards can include injury from sharp edges and protruding objects or the risk of becoming caught up or entangled in waste materials.

“Finally, waste may contain substances that are toxic to animals or the environment.

Lead poisoning can be quite common where car batteries or other waste materials are dumped and substances like antifreeze are attractive to animals but extremely toxic.

“Of immediate concern is the amount of garden waste now being dumped. If that waste contains plants like yew or rhododendron it will quickly cause death in cattle and sheep if eaten. Similarly, grass cuttings pose a significant danger to horses.

“The plea to the public, for the health of livestock and wildlife, is please store your waste until the lockdown is over, then dispose of it responsibly.”

Rural organisations call for lockdown travel guidelines to be reviewed