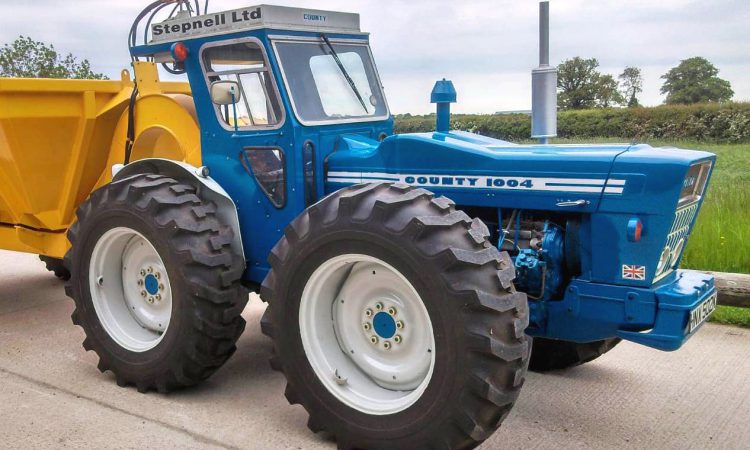 Ford based specialist tractors are always popular at auctions. At the last vintage and classic sale held by Cheffins, a near record price of £210,000 was paid for a County 1474.

In its upcoming July sale, there are further Ford conversions, which although of equal interest to enthusiasts and collectors, are expected to fetch more modest prices.

The County 1004 is, as its name suggests, a 100hp tractor with four-wheel-drive.

It is powered by the six-cylinder Ford industrial engine which found many other homes, including the Ford Thames Trader.

Although companies like County made their name converting Ford tractors in the second half of the last century, Ford conversions were nothing new, even then.

Proof of this comes with Ford Model T tractor adaption which is fully running and driveable. It is set to sell for £8,000-10,000.

Model T’s were pressed into a whole variety of uses and many smaller manufacturers sprung up in America, offering conversion kits which usually involved lowering the gearing and reinforcing the chassis.

Red as well as blue

Tractors needn’t be blue (or black) to be collectable, and there are many other items of interest to those looking for a hobby machine or a workhorse.

Introduced in 1978, the IH 3588 was very different from most articulated tractors of the time, in that the cab was mounted on the rear section rather than the front.

Zetor was an early pioneer of four-wheel-drive and passenger seats, features that Anglo/American manufacturers took many more years to adopt.

The next Cheffins Vintage Sale has over 1,300 lots of vintage and classic tractors, farm machinery, cars and bikes. It will take place on Saturday, July 24, at the firm’s sale ground in Sutton, Cambridgeshire.