Modern tractor manufacturers will tell you that they spend an awful lot of time and money on styling their products.

Indeed, it is a point that even Zetor never fails to mention. Valtra scored some brownie points in the latest ‘Tractor of the Year’ awards for the appearance of its T254. Why then, you might ask, do some competing tractors look so similar nowadays?

It was not always thus; wind the clock back to the 1980s. Then – it could be argued – tractors were far more distinctive. One of the most immediately recognisable brands was Deutz-Fahr; it launched its shapely DX range of tractors in 1978.

Besides being painted a conspicuous bright green, these tractors were adorned with a cab and body panels that appeared very modern for their time.

The straight lines and contrasting angles accentuated their ‘purposefulness’, rather than attempting to hide the tractor’s bulk (as is the modern trend).

In addition to their characteristic styling, DX models had five or six-cylinder, air-cooled engines and fully synchronised gearboxes (offering 15 forward and five reverse gears). They were designed to be 4WD tractors from the outset.

Power output for the smallest – the DX85 – was 80hp. At the other end of the scale, the six-pot DX160 had 150hp on tap. The range also boasted a brand new cab, which was said to be light and airy but not especially quiet.

One of the more popular models in this new line-up was the DX90; it was originally equipped with a five-cylinder, naturally-aspirated engine rated at 88hp.

In 1982 Deutz-Fahr dropped that motor and replaced it with a four-cylinder, turbo-charged 90hp unit. With this engine installed, along with a new front axle and a 18F 6R transmission, the DX90 morphed into the DX92.

This tractor, it can be argued, then stayed in the range until 1989. However, early on in its life it was re-designated as the DX 4.70 – during a revamp of the company’s product dossier (when a new system of nomenclature was introduced in 1983).

Small improvements to the cab interior were evident but, otherwise, it remained largely the same.

An early example of the DX 4.70 recently came up for sale in Co. Galway. It is being offered by Finnerty Machinery Sales of Gurteen, Ballinasloe. The tractor harks back to 1985; it has less than 3,500 hours showing on the clock and is a local trade-in.

There is no mistaking these tractors; this one has been nicely refurbished to the level where it not only looks clean and bright but can also be put straight to work. Indeed, that was the object of the exercise. It is a revitalised workhorse, rather than a ‘Concours’ finalist.

Sitting in the cab, everything is satisfyingly solid – especially the massive hand throttle lever that stands to attention on the side of the dash. There is no subtle dial or switch to fiddle with; this lever is a gruff but reassuring invitation to ‘open up’ the engine that lurks beneath the bonnet.

The other striking feature is how bright this tractor is inside. There are no massive door pillars or slabs of metal obstructing the light. Even on the storm-ridden day of AgriLand’s visit there was no sense of darkness or gloom when sat behind the wheel.

It was also reassuringly dry in there, despite the best efforts of the weather to creep in through any available hole or gap.

Though equipped with a Quicke front loader, the 47L/min hydraulic pump may take the edge off any great expectations of rapid cycle times. However, the arms and hoses appear to be in remarkably good shape; so too are the tyres and side panels.

Deutz was involved right from the beginning of the evolution of the diesel engine; Deutz-Fahr’s DX range from the 1980s probably represents the last of its purely-mechanical tractors.

It is rare to see such a well-preserved example – from that era of the German manufacturer’s legacy – come onto the market here in Ireland. 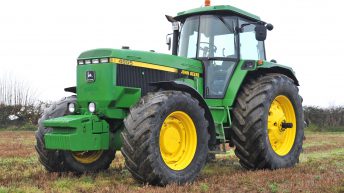 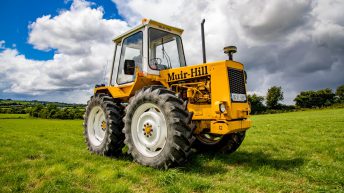