Sawmills tend to be congested areas – with stacks of logs, sawn wood and piles of mulch taking up every available square inch of space. Any vehicle that is intended to operate within such confined spaces has to be agile by nature, which is fine for forklifts and small loading shovels (that are designed for such situations), but 4WD tractors are a different proposition altogether.

It was the need for manoeuvrability which led John Forristal (pictured below) of Forristal’s Sawmills, Ferrybridge, Co. Kilkenny, to seek out a beefy Ford which had the power of a TW but enjoyed the advantage of a smaller turning circle.

“I wanted the central driveshaft for extra steering lock,” explained John. “The TWs had it down the side of the engine, which reduced the room available for the front wheels to turn.”

Another advantage of the Ford 8210 is the relatively good price for which one can be bought, when compared to a TW.

I think farmers are afraid of buying them second-hand.

The reason, John believes, is that they were bought new by contractors who considered them to be a viable alternative to the TWs, but it turned out they were “not so solidly built”. Many were worked as hard as the TWs, despite the 8210 being a lighter tractor.

Certainly the front axle appears a less substantial item and there are no chassis rails strengthening the frame; the engine remains as the single stressed member holding the front and rear together.

Thankfully, the engine block is bolstered by a heavy-duty cast steel sump which takes the greater part of the strain. Yet, the 8210 weighs in at only 4.2t (the bare machine on its own) as opposed to the 6.3t of the TW-15.

The engine is the same six-cylinder (6.6L) unit that’s found in the TWs; in this application, though, it was tuned to produce an easy-going 110hp. There is no turbo or intercooler; it remains naturally aspirated and relatively unstressed. Yet, that does not prevent it suffering porosity problems.

Soon after John acquired the tractor in 2000 he noticed water getting into the oil – a problem which wasn’t due to head gasket failure. The engine was sent to a local engineering works, where the block was bored out and a dry-liner inserted. This, he hopes, has fixed the problem, and it worked out cheaper than a new block.

It should also prove to be a long-term cure. 18 years later, there is no sign of problems returning.

The Ford 10 series tractors went through three major stages during their time on the market; the first revamp came in 1986 – the year this model was first registered. This example is a late first-generation ’10 series’ model; John has brought it back to its original livery (with a light blue stripe along the bonnet).

At some point, this tractor’s colour scheme had been changed to the darker black band to make it appear like a later version – a pretence that John was not happy to go along with. He had the correct colours re-applied when it was re-sprayed by local bodyshop owner Philip Gaffney, who has produced a beautiful finish.

The original wheels have also been replaced. The older ‘square-centred’ types were showing signs of fatigue (at the join with the rim), so John has replaced them with a ‘conventional’ set (that have eight mounting points instead of the four). This much stronger arrangement has shown no sign of cracking (unlike the old ones).

Another major job was the replacement of the cab. The original ‘Q cab’ was rather tired and rusted, so the hunt was on for another.

It took John quite a while to find one. He even tracked one down in Spain while on holiday there, although it turned out not to be in as good condition as he would have liked.

Having scoured near and far, he eventually found one in New Ross – just a couple of miles down the road. However, this particular cab had originally been fitted to a TW and there were some small differences between it and the version fitted to the 8210 – the most obvious being an extra reinforcing bar across the frame at the base of the rear window.

Inside, the cab is clean and bright; the controls are sufficient to operate the tractor without any degree of sophistication. There is not a trace of anything electronic.

The clock shows 8,500 hours – a somewhat historical figure as it no longer functions. John thinks the true total is nearer to 10,000; yet the tractor seems fresher than that.

Being relatively ‘lightweight’, the 8210 is none too cumbersome; it’s not a tractor that can be accused of lumbering anywhere (unless it has a trailer attached). It is this “nimbleness when compared to a TW” that appeals strongly to its owner.

Purists may argue that, with the changes that he has made to the tractor, it can hardly be considered original. This, to a certain extent, is true. Yet John bought it as a working tractor; it has to earn its living hauling timber from the woods – bringing it back to the yard.

It is, he feels, the ideal tractor for the job and any modifications made have enabled him to keep it working. Murphys Motors of Glenmore has been particularly helpful – in supplying both parts and knowledge of such classic Fords.

Bringing logs in for processing has been part of the family business for at least three generations at this location. Customers include Paddy Lee Trailers of Waterford, whose bright red products are the stuff of legend in the region.

It is indeed fitting that much of the wood that has gone into Paddy’s trailers may well have been brought from the forests and cut to size by such a keen tractor enthusiast as John Forristal and his very nicely kept example of the Ford ’10 series’. 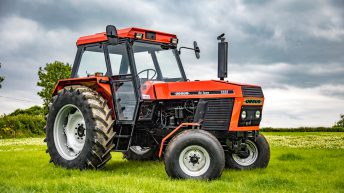 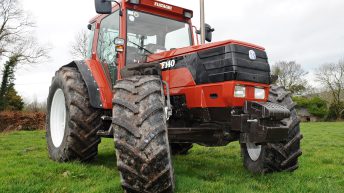