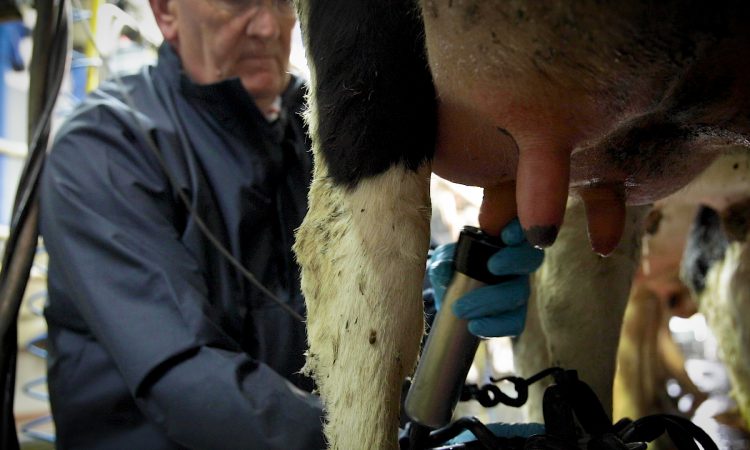 Despite concern, two weeks since the end of the Brexit withdrawal period, trade issues have yet to materialise over the combined processing of milk from Northern Ireland and the Republic.

The issue raised its head again this week after Irish Foreign Affairs Minister Simon Coveney warned farmers at an IFA meeting in North Tipperary that the Brexit deal was still “problematic” for cross-border dairy firms.

Around a third of Northern Ireland’s milk crosses the border for further processing.

However, once at the factory, milk from both jurisdictions is mixed together for pasteurisation and further processing, meaning the resulting produce is technically now considered a ‘mixed-origin product‘.

As a result, it was feared products made using milk from both jurisdictions would be unable to be sold through EU trade deals. However, two weeks since the end of the UK’s Transition Period and the issue has yet to materialise.

Northern Ireland’s largest milk processor Lakeland Dairies is among the firms affected but, for now, it’s business as usual for the company.

A spokesman said: “The longer-term impact from the UK’s exit from the EU will only be seen in the weeks, months and years ahead and we will approach this on the same efficient and competitive basis as we always have done. We appreciate Minister Coveney’s efforts to sort out these issues.”

Ulster Farmers’ Union (UFU) chief executive Wesley Aston said the matter had been discussed during a meeting with the Irish Government’s Department of Foreign Affairs just days before the comments were made.

“We do have our issues as primary producers, but we need to get the supply chain sorted out,” he told agricultural journalists in the union’s annual briefing yesterday (January 14).

“Thankfully, because of that wider trade agreement and because of the fact we don’t have tariffs or quotas, it does simplify things considerably.

In broad terms, we haven’t seen anything [major] immediately, but overall, we can be optimistic about where we are going in terms of accessing Europe and accessing the GB market from a Northern Irish perspective.

“I know politically, there is discussion around revoking Article 16 and the Prime Minister responded to that, rightly, pointing out at this point they’re only teething problems …structures are there to address those issues and we want to go through that process first of all before we say ‘it was an absolute disaster and we have to revoke Article 16’. We don’t feel we are there by any means at this point in time.”

‘Processors aren’t jumping up and down’

UFU president Victor Chestnutt said he would be “more content” about the matter as time goes on and added that issues were yet to come to light.

“The EU understandably didn’t want to open up all of those trade deals again, because when you open up trade deals you have to give a concession to get a concession,” he said.

“Some of the milk processing companies which we were in touch with said they had contacted the companies they were sending to and the majority, the vast majority, said they were seemed to be happy that the milk was originating from the island of Ireland.

I will be a lot more content as time goes by that there are no major hiccups but at the minute the milk companies aren’t coming to us jumping up and down saying they have a problem.

However, Chestnutt also questioned why processing capacity had not expanded to keep up with supply and said that a lack of government support had already cost Northern Ireland’s agri-food sector growth.