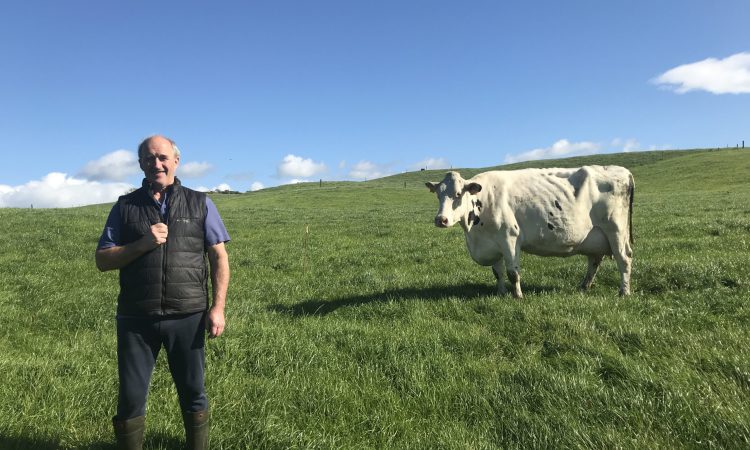 In this week’s Dairy Focus, Agriland made the trip to the rowing stronghold of Skibbereen, west Cork, to Jerry Hegarty of the Mohoncross Holstein herd.

Jerry, alongside his wife and three children, Alice, Emily and Dermot, is currently milking 100 Pedigree Holstein cows on their farm overlooking the river llen.

The family farm a total of 120ac, with 40ac owned and the remainder leased. A split calving system is operated on the farm with 70% of the cows calving in spring and the remaining 30% in autumn.

Jerry started the Mohoncross Holstein herd from humble beginnings, with the home farm only consisting of 40ac. The farm had been rented for a number of years before Jerry decided to go farming.

He stated: “I always had a love of farming, I started out with 40ac, 20ac of which was pure scrub and the remaining 20ac had been neglected.

“I had no machinery, no buildings and most importantly no money.

“I left school at 17 and went working with a neighbouring farmer. I bought my first Friesian calves in 1975, the year of disastrous calf prices. You could buy a good Friesian heifer calf for £5/head.

If prices hadn’t been so bad, I probably would never have got going. It was very hard in those days to start from scratch.

“From such a low base it was very difficult to build up a credit rating to get borrowings. At the time borrowing a lot money was not really an option, interest rates were 20% plus.

“I started milking in 1978 with nine cows. Myself and my mother were milking them by hand and our neighbour took the milk to the creamery for us.

We had to rent and buy quota over the years to increase cow numbers, we built up to 40 cows, then 50 cows.

“We started renting blocks of land and increased to about 60 cows until quotas went. After the quotas were removed I increased cow number to 100 cows.

I am almost 62 years old, so I won’t get that upset about it at this stage.

“My son is half interested in the farm, he is at college studying to become a nurse. He might do it but probably not to the same level I did, you cannot force him to do it – he has to want to do it.”

Commenting further on how the farm has developed over the years, Jerry said: “Starting from scratch is a drawback, but it also means you can do things the way you want.

“There are pros and cons for it, it was a struggle for many years. The cubicle shed and silage pit were built in 1979.

“In 2017 we extended the parlour to 14-units and added automatic cluster removers (ACRs).

“We constructed an open slurry store in 2008. I am still planning on building a calf house this autumn, when you’re young it is fine carrying buckets of milk, but as you get older it needs to be easier.”

“That gave for a bug for them and it is a bug; a serious bug. Having that interest in cows means you will go that extra mile to try make them as efficient as possible.

Since I started with pedigree cattle the breed has changed, it started as pure Friesian, it then went to pure Holstein and now it is coming back a bit.

“A lot of credit has to be given to the previous generation of breeders for their foresight and courage to import some of the best genetics from around the world.

“I heard Seamus Kelly from the Monamore herd speak at an event in 1980 with the Cork Friesian club.

“He spoke about how back in the 1950’s it was fashionable to have PI (pure imported) after a cow’s name. Most of these came from Holland – lovely square, low set Friesian cattle.

“In the 1980s it was fashionable to have PI after cow names, for cattle from Canada or America, which are much taller and a more ‘dairy’ animal.

He (Seamus Kelly) said if he was asked what kind of animal we would have in 2000, it would be somewhere between the two PI’s and he was right. That is where the breed is now settling down.

“There was one time you went to shows and the tallest cows won the class, where now they’re a more function-balanced cow.”

“It hard to get everything, a cow with very high fertility and protein usually does not have enough milk,” he continued.

“Some cows have weak points and you would try match them with a bull that will improve that weak point.”

Some of the bulls Jerry is currently using a lot of are: Stantons Applicable, Walnutlawn Sidekick, Stantons Alligator, Delta-Lambda and Stantons Chief.

It is a full-time job to be honest. If you don’t have an interest you are wasting your time.

“It is almost a hobby that I have made a living out of, some people have hobbies that cost them a lot of money.

“The cows we are currently milking suits our system. We used to show cows but that is finished now, it is a young man’s game.”

Speaking about the production of the Mohoncross herd, Jerry stated: “We are currently averaging 9,000L at 3.75% fat and 3.3% protein.

Grass is very much the focus on the farm. I like to keep things simple, I’m not a fan of machinery.

“We start grazing in early February, cows go out for a few hours a day to start and by the first week of March, weather permitting, I would aim to have them out by night.

“I don’t have a diet feeder, which is the ideal way of feeding a cow, but our sheds are not set up for one, and as I said I’m not fond of machinery so will stay away from them.

“I find just feeding silage and concentrates hits the protein in the winter and the volume is okay. The main thing is that it is simple.”

Jerry is planning on reducing cow numbers with a Mohoncross youngstock sale planned for later this month, with the aim of having a better work life balance.

Jerry stated: “I am currently milking 100 cows and hoping to cut back to about 80. I was in derogation so hoping I will get out of that.

“My wife gives out that I am working too many hours a day, to cut back a bit, and I have to keep her happy.

There is no major financial pressure; two of the kids are finished college and one is in his second-last year.

“I am having a sale at the end of month with 110 young animals, a mix of heifer calves and in-calf heifers, along with 15 cows.”

The proposed changes to the nitrates did not have much of an influence on Jerry’s decision to reduce cow numbers, with the changes possibly punishing Holstein breeders more, due to higher yields.

Commenting on this, he said: “Farmers have faced challenges before and we have overcome them.

“I do not think that it will affect people keeping Holstein cows, either it is in you or it is not. Farmers will find a way to work with it.

“A lot of the current proposals do not make a lot of sense, like the changes to slurry storage and spreading.

I would agree that we probably do need to be more conscious of the environment – we have to think of the next generation.

“But in Ireland, we are one of the most efficient and environmentally-friendly producers of milk.”

As previously stated, Skibbereen is very much a rowing stronghold, with Jerry’s daughter Emily a member of the women’s coxless four that won Bronze in the Tokyo Olympics in 2020.

Commenting on that, he said: “It was mad to be honest, nothing could prepare you four it.

Emily is only 22 so it was a great experience, it would of been nice to go, but with the restrictions that was not possible.

“Dermot is still in college and plays a lot of football and hurling, while Alice is a doctor in Australia.”