‘Dairy price recovery is two steps forward, one step back’

At this early stage of the dairy price recovery, it’s very much a case of two steps forward, one step back, according to Nathan Penny, Rural Economist with New Zealand’s ASB Bank.

He says a prime example of this is the latest drop in dairy prices at the Global Dairy Trade auction which followed two positive price auctions.

The price recovery is predicated on a global production growth weakening, but Penny says that at this juncture dairy buyers are not convinced this supply correction is happening.

The Rural Economist says that indeed, recent production data, particularly out of the EU, have been unconvincing on this front, however, ASB anticipates that this picture will change.

Through the middle of 2016, monthly EU production data will slow towards zero on an annual change basis – changes which we foreshadowed in a report a month ago.

“However, Fonterra’s opening 2016/17 season milk price forecast (due later this month) will precede these data.

“As a result, we expect Fonterra to set its opening forecast near $5.00/kg. But if production growth data are confirmed weak in later months as we suspect, prices will recover during the season.

In the latest Global Dairy Trade auction, dairy prices fell 1.4% which was in contrast to ASB’s expectations of a modest rise.

At this early stage of the dairy cycle, buyers appear yet to be convinced of a tightening in EU dairy supply, in particular, with the falls in butter and SMP prices emphasising this point, according to Penny.

“Indeed, production data still appear strong on the surface. For example, EU production rose 7.5% over January and February (including an extra day for leap year) compared to the same two months a year ago.

“However as we have stated previously, seasonally-adjusted data show that EU production has plateaued and may already be trending downwards.

“Moreover, annual change data will also begin to step down through the middle of the year.” 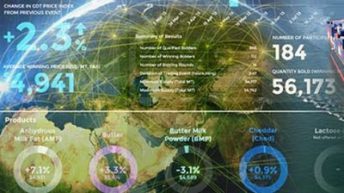